(Our thanks to IntLawGrrls for the opportunity to contribute this guest post)
One of the defining aspects of the end of the twentieth century was the turn to market liberalization and political democracy as twin organizing principles for human societies in many parts of the world. These processes present an opportunity to better understand global norm formation and policy diffusion as actors grapple with the new circumstances of transnational openness.
One of the central aspects of responding to the dilemmas of globalization is how actors come to understand the nature of the phenomena they confront. 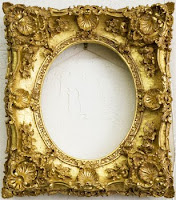 In our paper Intersubjective Frames and Rational Choice: Transnational Crime and the Case of Human Trafficking (recently renamed), we posit a theory that rational policy choices are conditioned on the prior and socially defined processes of issue framing. We argue for a two-step process that examines:
► 1st, how the argument is framed—a subjective, purposive, and persuasive process—and
► 2d, how once a frame has been selected, states rationally imitate the policies of states to whose policies they are especially sensitive.
Our findings affirm that norms and policies diffuse according to mechanisms that are highly sensitive to how they are framed.
We view the debate itself over frames as a strategic struggle to view the world—or at least the issue at hand—in ne particular way rather than in some other. Actors want to advance frames they think will further their interests, as well as those that they think will increase the chances that their favored policy will be accepted. Pressure and persuasion are explicit parts of this process. There is every reason to expect material and peer pressure to be brought to bear to convince skeptical states to accept the frame and to adopt the dominant powers’ interpretation of the rational policy response.
Accordingly, we stress that subjectively selected frames are demonstrably powerful prisms for rational action. Just as states rationally compete for capital by liberalizing capital controls when they accept the “Washington consensus,” we argue that they rationally anticipate externalities when they look at human trafficking through a transnational crime rather than a human rights lens.
We have used these insights to explore the emergence of norms and the diffusion of policy in the area of human trafficking – an issue that is without doubt susceptible to interpretation through multiple frames. We have stressed three of these frames in our paper:
► A victim protection frame,
► A human rights frame, and
► A transnational crime perspective.
Empirically, we observed struggles in international forums that reflect the critical issues of how human trafficking should be understand and tackled. The major Western powers were animated primarily by the transnational crime frame (despite the fact that most are also strongly committed to human rights generally). Non-governmental actors worked hard to offer an alternative that would emphasize the rights of victims. We have documented the consequences of this clash of ideational commitments:
► The earlier resolutions muted their human rights language over time,

► Discussions became lodged in Vienna (headquarters of the U.N. Office on Drugs and Crime) rather than exclusively in New York (and the U.N. General Assembly), and
► Ratification of the eventual Trafficking Protocol was made conditional on prior or simultaneous ratification of the Transnational Crime Convention itself.
This occurred because several major powers thought this frame favored their own interests in countering transnational crime and illicit migration.
For the most part, state actors were relatively easy to convince: after all, transnational crime potentially threatens state actors’ developmental plans, corrupts the local rule of law, and can interfere with other programmatic goals of the state. For this reason, the transnational crime frame was far more attractive to a greater number of states than the victim protection or human rights frames would have been. It bolstered rather than challenged traditional concepts of sovereignty, and legitimated states’ quests to protect their borders. The text of the adopted protocol clearly reflects this calculation. So does the extremely rapid pace at which it was negotiated.
The empirical bulk of the paper finds significant support for mechanisms of policy diffusion that follow, given the adoption of the transnational crime frame.
In contrast to most human rights issues, transnational crime involves serious externalities of at least two kinds:
► Direct externalities from the criminal activities themselves (violence, weapons and drug trafficking, money laundering, public health threats, documentation fraud and border violations), as well as
► Policy externalities (the anticipation that if a nearby state raises the costs associated with using its territory to commit these exploitative crimes, criminal networks will have incentives to move their operations elsewhere). 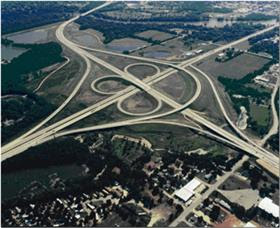 We have proposed and tested very precise ways to measure and test this argument.
Human beings are most often trafficked using surface transportation, and the lowest-cost option in most cases is to move them along roadways. Using satellite imaging, we have found road connections to be strongly positively correlated with adoption of a neighbor’s policies, both the criminalization and ratification. We argue this reflects vulnerability to policy externalities which can divert criminal networks from a high enforcement jurisdiction to one with lax enforcement. This is not especially consistent with theories of institutional isomorphism, which emphasize the relatively uncritical acceptance of Western scripts as models of appropriate state form and practice. The frame is largely Western, but the precise mechanism of policy diffusion we document is very local – right where the rubber hits the (transborder) road.
The Western countries and particular the United States reinforced the transnational crime frame with explicit forms of material and social pressure. The passage in the 2000 of the Trafficking Victims Protection Act in the United States – with its emphasis on rating countries’ efforts to stop human trafficking and threatening explicitly to sanction with the withdrawal of aid – both reflects and reinforces the transnational crime frame. The evidence suggests that the reputational and material consequences of U.S. tiers rankings were taken seriously; these were strongly and consistently correlated with the propensity for a country to criminalize human trafficking (thought not to ratify the protocol) following a poor rating. (map credit) 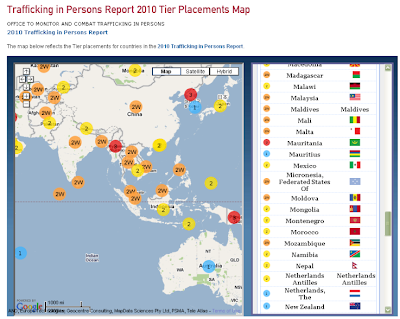 There is also the suggestion of an intriguing link between media attention to the trafficking issue and the willingness of countries to criminalize.
The crudeness of our measure does not at this point permit us to do much more than to suggest a plausible link, but it could be that attention in the media to trafficking problems reinforces the dominant transnational crime frame, potentially accounting for diffusion through learning processes as well.
Emphatically, we have not been able to show that criminalization and treaty ratification will lead to effective law enforcement on the ground. Such a project will inevitably be frustrated by a lack of reasonably good data on transnational crime in general and human trafficking in particular. Speculation about effectiveness aside, this research suggests some clear drivers in the spread of anti-trafficking norms worldwide.
by Paulette Lloyd + Beth A. Simmons at 5:00 AM