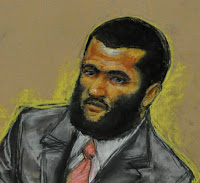 Emanating from Guantánamo yesterday:
News stories reporting rumors that the military commissions case of United States of America v. Omar Ahmed Khadr is about to end with a plea bargain.

If not, trial is set to begin later this morning in a GTMO courtroom.
Confirming rumors reported by the Los Angeles Times' Carol J. Williams on Saturday, Reuters' Jane Sutton speculated on a reputed agreement by which Khadr, now 24 (above right), would serve "one more year at Guantanamo, followed by seven years in his native Canada." (image credit) Sutton added that Secretary of State Hillary Clinton had talked Sunday with her counterpart in Canada, which would have to approve any such deal.
Later on Sunday, Michelle Shepard of the Toronto Star, author of a book on the case, acknowledged such speculation, but stressed the statement by "Khadr’s Canadian lawyer Dennis Edney" that "there was no deal, 'as of this moment.'" Shepard thus continued with a preview of the trial, should it occur.
The Miami Herald's Carol Rosenberg, meanwhile, led with concern that any Khadr deal might remain secret (as has that of another detainee). Such secrecy would challenge "[t]he Obama administration's quest to show that military commissions can be as transparent and fair as other U.S. courts," Rosenberg reported.
(Indeed, as posted in the update above, this morning Khadr did plead. The agreement was not released, but is believed to provide for the sentence described in this post.)
As blogreaders well know from our prior posts, Khadr was 15 (above, middle) when seized by U.S. military personnel during a firefight in Afghanistan. He has spent 1/3 of his life in American custody. As detailed in his Department of Defense case file, Khadr now faces trial on charges of, inter alia, throwing a grenade that killed a member of the U.S. special forces during the firefight.
At the preliminary hearing that I attended in December 2008, defense lawyers indicated that proof of the charges at trial may prove difficult. From the beginning, however, proceedings have focused on 2 other aspects of the case:
► 1st, what Khadr suffered, including treatment as a "human mop."
► 2d, that if the acts alleged in fact occurred, Khadr was a child soldier. That fact alone ought to preclude prosecution and punishment, many have argued -- among them our colleague David M. Crane, former Chief Prosecutor for the Special Court for Sierra Leone.
The plea agreement bruited in yesterday's media would seem to take neither aspect into account.
Assuming speculation is correct, Khadr would not see release until after having served 16 years in custody -- a sentence scarcely seeming to incorporate much mitigation on account of detention conditions or any other reason.
The reputed deal departs markedly from international law with regard to child soldiers.
Consider the 2000 Optional Protocol to the Convention on the Rights of the Child on the involvement of children in armed conflict. In Article 6(3) states parties agree to

take all feasible measures to ensure that persons within their jurisdiction recruited or used in hostilities contrary to the present Protocol are demobilized or otherwise released from service. States Parties shall, when necessary, accord to such persons all appropriate assistance for their physical and psychological recovery and their social reintegration.

States Parties shall cooperate in the implementation of the present Protocol, including in the prevention of any activity contrary thereto and in the rehabilitation and social reintegration of persons who are victims of acts contrary thereto, including through technical cooperation and financial assistance. Such assistance and cooperation will be undertaken in consultation with the States Parties concerned and the relevant international organizations.

The treaty's view that the children are "victims" and deserving of "rehabilitation and social reintegration," as well as "physical and psychological recovery," is obviously at odds with a prosecution and punishment strategy with regard to these same children.

It is at odds, then, with the reported disposition of Khadr.
Canada became a full state party to the protocol in July 2000; the United States, in December 2002. The countries' statements at ratification said

nothing to undercut the force of the articles quoted -- which, as indicated in this report of the International Committee of the Red Cross, jibe with other treaties.
Wonder whether either state will address this discrepancy.
by Diane Marie Amann at 1:05 AM