I have the audacity to believe that people everywhere can have three meals a day for their bodies, education and culture for the minds and dignity, equality and freedom for their spirits.

(Watch the speech here.)
Almost 50 years later, we are still waiting.
It's not like nobody else noticed that we had a Hunger Problem.
The right to food has been at the heart of international discourse as long as the international community has been discussing human rights:
► Article 25 of the Universal Declaration of Human Rights recognized the right to food as a basic human right.
► Article 11(2) of the United Nations Convention on Economic, Social and Cultural Rights recognizes the right to be free from hunger. (The United States is still not a signatory to that convention).
► The 1974 World Food Conference declared that "every man, woman and child had an inalienable right to be free from hunger and malnutrition." It committed the international community to eradicating hunger by 1984. (Report available here.)
► The World Food Summit of 1996 set a goal of halving the number of chronically people by 2015. 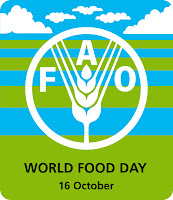 ► The Millennium Development Goals set a target of halving the proportion of people living with food insecurity by 2015. (Notice how much less ambitious the goals have become over time.)
In 1979, the Food and Agriculture Organization declared its intention to designate October 16th -- the date of its founding in 1945-- to be World Food Day. The reason for World Food Day was to "heighten public awareness of the world food problem and strengthen solidarity in the struggle against hunger, malnutrition and poverty." In 1980, recognizing that "food is a requisite for human survival and well-being and a fundamental human necessity" the U.N. General Assembly, in Resolution 35/70, endorsed observance of World Food Day.
Today marks World Food Day's 30th celebration. The clock ticks ever closer to the 2015 deadline for achieving the Millennium goals and the World Food Summit Goals.
So, how are we doing?
In its report entitled the State of World Food Insecurity 2010, the FAO states that almost 1 billion people are undernourished. That is more, in absolute terms, than were undernourished in 1979, and roughly the same in 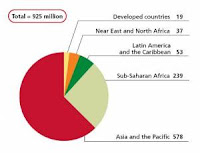 the first essential component of social justice is adequate food for all mankind.

With all due respect to Dr. Bourlag, who devoted his life to eradicating hunger, no amount of new and better technology will solve this problem -- because it is not a food production problem. The problem with Dr. Bourlag's technology-based approach is that today's hunger is a food distribution problem. We already produce enough food to feed all the people on the planet. We just don't use that food to feed the people who are hungry.
Hunger today revolves around the way that global trade is structured. Indeed, since the global food price crisis of 2008, Olivier De Schutter, the United Nations' Special Rapporteur on the right to food, has been cautioning about the need for structural measures to address food price 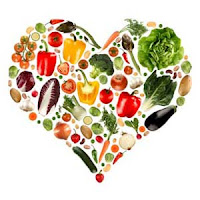 increases. Even though this year's wheat crop is one of the largest ever recorded, food prices are skyrocketing. The Special Rapporteur identifies main culprits responsible for increasing prices in a time of plenty seem to be commodity speculation on international food markets, disinvestment in social protection schemes, and a global governance scheme that hinders the ability of governments to mitigate price shocks.
Perhaps we should rename it World Hunger Day.

(Personal note: About 195 million children are part of that 1 billion who suffer from food insecurity. As I watched my 4 year old eat her dinner after writing this post, all I could think about was the unbearable pain that a parent unable to feed her child must suffer. I made a donation to Doctors Without Borders'

Starved for Attention campaign. Please consider doing something similar.)
by Rebecca Bratspies at 6:00 AM