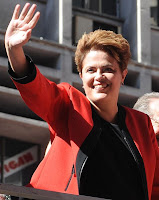 Brazilians have just elected their 1st woman President.
An economist and former Cabinet minister, Dilma Rousseff (right), won a runoff election by a margin of 55.2% to 44.8%.
Key to the political newcomer's victory, according to Reuters: the endorsement of outgoing President Luiz Inacio Lula da Silva, known as "Lula," coupled with a promise to continue Lula's

policies that have lifted millions from poverty and made Brazil one of the world's hottest economies.

There is a consensus that she will keep the guidelines of the incumbent government.