(Not) facing the nation

IntLawGrrls formed in 2007 partly out of concern about the narrow range of what passes for wide-ranging public discourse.
Examples:
►A congressional hearing on the question of what to do about Guantánamo featured a panel purportedly representing the spectrum of answers. A photo in the next day's paper told a different story. Every witness had once worked in the U.S. Executive Branch and lived on the East Coast. All but one were of European ancestry, and only one could lay claim to any expertise in human rights law. None was a woman. (The picture in mind appeared in late 2006, if memory serves. But it's replicated weekly on Capitol Hill. (credit for 2009 photo of Senate Foreign Relations Committee hearing on Iran))
►Op-ed pages of major newspapers feature men in proportions far greater than that of men

among the U.S. population. This phenomenon spluttered onto news pages in 2005, when the University of Southern California law professor at right, Susan Estrich, complained, and an op-ed editor pushed back. Disparity in the sex of cybercommentators, then and now, appears even greater.
IntLawGrrls endeavors to help change things, by: offering a virtual-world space for commentary by women; pointing out women's accomplishments through items like our expert series; and improving real-world public discourse through events like our "Women and International Criminal Law" roundtable to be held this October 29.
Now comes a new study charting that in the world of Sunday morning talk shows -- reputedly a world to which official Washington pays close attention -- disproportions are, well, off the chart.

The evidence is presented forcefully in "Guess Who Won't Be Coming to the Studio: An Unknown Congress," published in the Summer 2010 edition of the law journal Green Bag. The author is Alex B. Mitchell (left), a 3d-year law student at George Mason University School of Law in Arlington, Virginia.
Mitchell analyzed who appeared as guests in 2008-2009 on CBS' "Face the Nation," NBC's "Meet the Press," ABC's "This Week," "Fox News Sunday," and CNN's "State of the Union." All his findings are well worth pondering with regard to representation not only on talk shows but also in the halls of Congress. Here're his key bottom lines:
► Minorities: More than a third of Americans -- 36.9% of the population -- belong to this category. Among them, of course, is President Barack Obama. Yet their representation in Congress is less than half the overall number -- 14.6%. And their representation on the talk shows? A near-infinitesimal 2.5%.
► Women: More than half of Americans -- 50.8% of the population -- are female. Among them, of course, are House Speaker Nancy Pelosi and Secretary of State Hillary Clinton, women who stand 3d and 5th, respectively, in the line of presidential succession. Yet women's representation in Congress is less than a third the overall number -- 16.9%. And women's representation on the talk shows? 13.5%, two-thirds smaller than their representation among all Americans.
Further skewing matters are a few other facts that Mitchell unearthed. 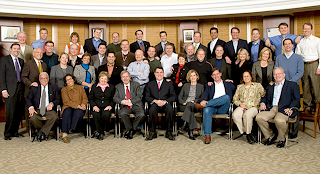 Explanations aside, the empirical effect of predominantly interviewing one demographic ... is that the wealth of diversity of ideas that make up our nation is stifled.