(Delighted to welcome back IntLawGrrls alumna Cindy Galway Buys, who contributes this guest post on her scholarship)

Many international law professors likely teach the 1955 International Court of Justice decision in The Nottebohm Case.
If so, they will recall that Frederic Nottebohm was a German-born businessman living in Guatemala at the time of World War II. He traveled to

Liechtenstein’s grant of citizenship to Nottebohm because he did not have a genuine connection to Liechtenstein.
Reading the ICJ decision always left me with unanswered questions. Accordingly, I began digging into the history a bit more to better understand why the ICJ reached the decision that it did.My research revealed that Nottebohm was the victim a little-known program run by the United States during World War II in which the United States pressured Latin American countries like Guatemala to identify persons of German nationality or ancestry and turn them over to the United States for internment for the duration of the war. Many of these persons were arrested and detained for lengthy periods of time as Nazi sympathizers on the basis of mere accusations unsupported by any real investigation or evidence. 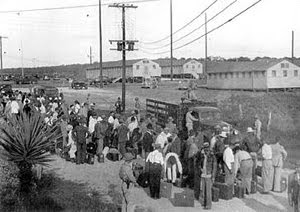 Sadly, as with the Japanese-Americans who were forced into detention camps during World War II, U.S. law and courts allowed these arrests and detentions of persons with German connections with little or no proof of Nazi sympathies, much less subversive activities. (credit for photo at right of arrival at Camp Kennedy, Texas, whose detainees included Germans from Latin America)
The original motivation for the U.S.-Latin American Detention Program appears to have been national security concerns, especially after the attack on Pearl Harbor on December 7, 1941. However, as time went on, the United States continued detaining persons who, like Nottebohm, had been deemed to present little or no security risks, because it was beneficial for the United States and Latin American governments to do so for economic reasons.
Thus, what started as a national security measure evolved into a program aimed at increasing U.S. economic influence in Latin America. Continuing to treat Nottebohm as an alien enemy ultimately paved the way for the Guatemalan government to expropriate his assets in Guatemala without compensation. The wartime setting and the alien enemy accusations also may have influenced the ICJ in its decision.
This research is set forth in an article I have posted on SSRN, entitled Nottebohm's Nightmare: Have We Exorcised the Ghosts of WWII Detention Programs or Do They Still Haunt Guantanamo?
The article begins by telling the story of how Frederic Nottebohm and his extended family came to be caught up in the U.S.-Latin American Detention Program. It relates the motivations behind the creation of the program and analyzes the legality of the program under both United States and international law existing at the time. The 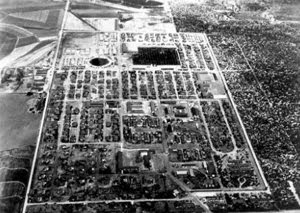 article next examines the extent to which the law has evolved and whether the changes in the law would lead to a different result today. (credit for photo at left of Crystal City, Texas, detention camp for interned Latin American families)
The article then draws parallels between the arrest, detention, and trial of alleged alien enemies during World War II and those practices being employed today with respect to alleged “unlawful enemy combatants” in the current fight against terrorism. Finally, the article suggests some lessons that may be learned regarding the treatment of so-called alien enemies during times of conflict that have relevance for current U.S. policies regarding the arrest, detention and trial of suspected foreign terrorists.
by Cindy Galway Buys at 6:27 AM