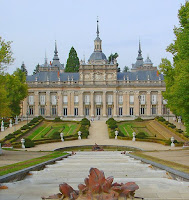 On this day in ...
... 1800 (210 years ago today), Spain returned Louisiana to France in a secret pact known as the Treaty of San Ildefonso, named after the town northwest of Madrid that's home to La Granja, the immense royal palace at right. (photo credit) Retrocession of Louisiana, which Spain had wrested from France in a 1763 peace treaty, was contingent on the establishment somewhere in Italy of a "kingdom" to be ruled by a son of the Duke of Parma. Following further machinations and negotiations, the transfer of Louisiana took effect in 1802. By means of the Louisiana Purchase the new colonial authority, France, sold it to the United States the next year.