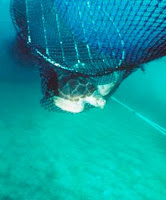 On this day in ...
... 1998, the Appellate Body of the World Trade Organization issued its report in a case brought by India, Malaysia, Pakistan, and Thailand, entitled United States - Import Prohibition of Certain Shrimp and Shrimp Products. The suit concerned a U.S. decision to restrict the importation of shrimp harvested by means that the United States determined risked undue "incidental taking" of endangered species of sea turtles. (credit for U.S. government photo of turtle escaping net thanks to the requisite TED device) The WTO Appellate Body interpreted Article XX of GATT, the General Agreement on Tariffs and Trade that governed the dispute, which permits countries to take certain actions that might limit trade in order to "protect...animal...life or health," or to "conserv[e]...exhaustible natural resources." The precise actions of the United States, though they fell within these exceptions, nevertheless were held in violation of the Article XX prohibition on "arbitrary or unjustifiable discrimination between countries where the same conditions prevail."