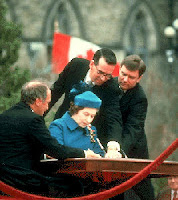 On this day in ...
... 1980 (30 years ago today), Prime Minister Pierre Trudeau announced that Canada's government would seek unilaterally to "patriate" its Constitution -- the term used in Canada to describe a revision that would permit modification within Canada's governmental structure rather than by the British Parliament, as then was required. The announcement took place amid internal political battles. One concerned the status of Québec within the Canadian federation, a question left unresolved following a referendum in May. Eventually the dispute moved to the judiciary. Finally, on April 17, 1982, British Queen Elizabeth II came to Canada to proclaim the new Constitution Act (above left). (credit for photo, also showing Trudeau, seated at left) Included in the package was an instrument on which we've posted, the Canadian Charter of Rights and Freedoms.
(Prior October 2 posts are here, here, and here.)
by Diane Marie Amann at 4:04 AM