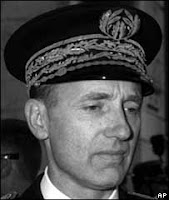 On this day in ...
... 1999, the highest court in France rejected an appeal by a Frenchman convicted of crimes against humanity committed during World War II. The court ruling that the convicted man, Maurice Papon, had forfeited the right to appeal upon taking flight to Switzerland earlier in the month. Papon had been sentenced to 10 years in prison in April 1998. Within weeks of the ruling on this day, Papon would be back in custody in France. As posted, the former Vichy official (left) died in 2007 at age 96. (photo credit)