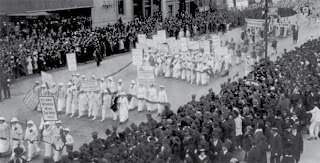 On this day in ...
... 1915 (95 years ago), "armies of suffrage from all the five boroughs" marched down New York's 5th Avenue in support of granting U.S. women the right to vote. (photo credit) The tens of thousands of demonstrators at the hours-long parade, The New York Times reported, "included men and women of all ages, from veterans in their seventies to babies pushed along in gocarts." Another 8,000 women and men marched in Philadelphia. It would be another 5 years before the marchers' wishes were granted by dint of the 19th Amendment to the U.S. Constitution.