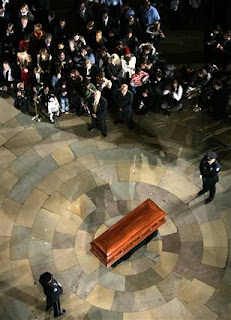 On this day in ...
... 2005 (5 years ago today), thousands waited in line all day to pay their respect at the coffin of Rosa Parks as it lay in state at the Rotunda of the U.S. Capitol. (photo credit) In the words of The New York Times:

A seamstress by trade, Mrs. Parks became the first woman ever accorded such a tribute and just the 31st person over all since 1852, a list that includes Abraham Lincoln and nine other presidents.

Parks had died at age 92 5 days earlier at her home in Detroit. In 1955, as is well known (and posted), Parks refused to give up her seat to a white man, thus beginning the Montgomery bus boycott -- and a career as a civil rights pioneer, often allied with the Rev. Martin Luther King, Jr.
(Prior October 30 posts are here, here, and here.)
by Diane Marie Amann at 3:04 AM