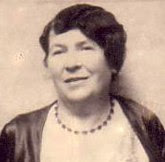 On this day in ...
... 1921, International PEN was founded in London by Catherine Amy Dawson Scott (right), a writer of poems and novels who hailed from Cornwall in England, whom many sources call "Mrs. C.A. Dawson Scott," and who herself aspired in her Victorian era to be "'The Sappho of this age.'" Decades earlier Dawson Scott had hosted women's suffrage and women writers' events. Operating from its beginning as a "voice in opposing political censorship and speaking for writers harassed, imprisoned, sometimes murdered for the expression of