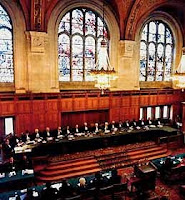 On this day in ...
... 1985 (25 years ago today), about 9 months after it had withdrawn from the case captioned Nicaragua v. United States, (later developments in the case here and here), U.S. Secretary of State George P. Shultz wrote U.N. Secretary-General Javier Pérez de Cuéllar, and announced that the United States terminated its acceptance of the compulsory jurisdiction of the International Court of Justice (courtroom at left). The termination took effect 6 months later, thus putting an end to nearly 40 years of U.S. compulsory participation in the Hague-based World Court. With regard to that 1946 acceptance, Shultz' letter said:

[T]his country expected that other states would soon act similarly. The essential underpinning of the UN system, of which the World Court is a part, is the principle of universality. Unfortunately, few other states have followed our example. Fewer than one-third of the world's states have accepted the Court's compulsory jurisdiction, and the Soviet Union and its allies have never been among them. Nor, in our judgment, has Nicaragua. Of the five permanent members of the UN Security Council, only the United States and the United Kingdom have submitted to the Court's compulsory jurisdiction.