Cheers to IntLawGrrls guest/alumna Fionnuala Ní Aoláin, honored earlier this month on the Irish Legal 100, an annual list compiled by the New York-based 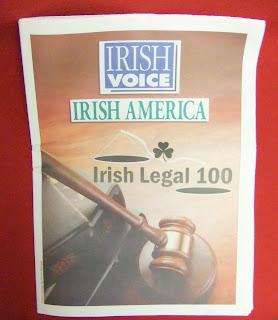 Irish America magazine. (Married as I am to an honoree on another of the magazine's lists -- a Top 100 Irish American -- I took special note of this award.)
As detailed in prior posts, Fionnuala's the Dorsey & Whitney Chair in Law and is Associate Dean for Planning and Research at the University of Minnesota Law School, Minneapolis, as well as Professor of Law at the University of Ulster in Northern Ireland, and cofounder and Director of the university's Transitional Justice Institute. A noted scholar in areas of gender, armed conflict, and states of emergency, she contributed a post this summer on the release of the Bloody Sunday Inquiry report on the 1972 paratrooper killings of civilians in Derry. And we're delighted that she will join her coauthors, IntLawGrrls Naomi Cahn and Dina Francesca Haynes, to discuss their paper, "Criminal Justice for Gendered Violence and Beyond," at the "Women and International Criminal Law" conference that IntLawGrrls is hosting this Friday in Washington.