Where is the Zone of Combat?

Battlefield.
Combat area.
Theater of operations.
These traditional terms in military discourse and the modern English language have described wartime areas for decades – indeed centuries. In today’s conflicts, states fight against nonstate actors and terrorist groups that are unbounded by sovereign territorial boundaries and that prefer tactics aimed at civilians often far from any traditionally understood battlefield. Those facts can easily confound attempts to use these existing terms effectively.
In particular, the present conflict between the United States and al Qaeda and affiliated terrorist groups poses significant yet seemingly fundamental questions, not only about the law applicable to operations against terrorists, but also about where the conflict is taking place and 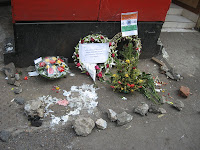 where that law applies. Beyond the obvious areas of Afghanistan, Iraq, and the border areas of Pakistan, there is, at present, little agreement on where the battlefield is – i.e., where this conflict is taking place – and an equal measure of uncertainty regarding when it started and when and how it might end. (credit for photo of memorial following 2008 attack in Mumbai, India)
Many practitioners and scholars now suggest that the traditional battlefield – once populated by tank battles and infantry – has been replaced by a more complex environment, sometimes called the zone of combat. Blending armed conflict and operational counterterrorism, the zone of combat has been characterized as anywhere terrorist attacks are taking place, or perhaps even being planned and financed. Even when not conceived of as broadly, the zone of combat encompasses areas beyond the traditional battlefield and could likely include any area where military responses to terrorists and terrorist attacks take place.
The “zone of combat” may simply seem to be yet another modern descriptive term that offers a clearer representation of real life than its antecedent. But it raises important and interesting legal questions. The fact that the zone of combat is movable and changeable only complicates the nature of these questions.
When many argue – and the United States consistently asserts – that the United States in engaged in a global war against Al Qaeda and other terrorist groups, one natural question is where is the battlefield, or zone of combat, in this global struggle against terrorist groups? And how do we identify it?
I explore these questions in an article in the forthcoming volume of the Georgia Journal of International and Comparative Law, entitled “Defining the Battlefield in Contemporary Conflict and Counterterrorism: Understanding the Parameters of the Zone of Combat.”
These questions of where and when are critical for understanding how to apply the law to questions of targeting, detention, interrogation, direct participation in hostilities, and trials, among others. Just as relevant legal frameworks help us understand the substantive scope of the applicable law within the zone of combat, those frameworks can help illuminate its temporal and geographic scope.
Traditional conceptions of belligerency and neutrality do not effectively address the complex spatial and temporal nature of terrorist attacks and states' responses. Nor can human rights law or domestic criminal law, which are both legal regimes of general applicability, offer a useful means for defining where a state can conduct military operations against terrorist groups.
In contrast, the law of armed conflict – naturally limited and triggered by the existence of an armed conflict – provides a framework not only for when it applies, but where and for how long. By using this framework and analogizing relevant factors and considerations to the conflict with al Qaeda, we can identify factors that can help define the zone of combat.
► First, some terrorist attacks and activities fall closer to the traditional conception of hostilities as understood within the law of armed conflict. Areas where these types of attacks occur naturally have a stronger link to a battlefield. In addition, when such attacks or activities occur regularly or over a defined time period, we can more clearly define the temporal parameters of the zone of combat as well.
► Second, in declaring that it is “at war with terrorists,” a state may envision the whole world as a battlefield. But the state’s actual conduct in response to the threat posed offers a more accurate lens through which to view the battlefield. Areas where the state uses military force, particularly multiple facets of military power, on a regular or recurring basis, should fall within the zone of combat while those where the state chooses diplomatic or law enforcement measures, or relies such efforts by another state, do not demonstrate the characteristics of the battlefield. This same analysis holds true for the temporal parameters as well.
Applying this type of analysis in a simplistic manner does indeed leave room for abuse by states, which might overuse military power merely to try to squeeze otherwise non-battlefield areas within the zone of combat. While this is certainly a consideration, government response is only one factor to take into account in assessing the parameters of the zone of combat and both the nature of the international community and the great expense, both human and material, of applying military might where not necessary will likely weigh against any such abuse.
►The third factor – territory – requires the most creative application. Terrorist groups do not use or connect to territory in the same manner as either states or non-state actors seeking to gain power or independence. Conflicts against terrorist groups, as a result, do not follow the boundaries on a map or the dictates of state sovereignty or international legal niceties. But territory can be a contributing factor to a paradigm defining the zone of combat nonetheless.
Looking at territory from a new angle, we can see that terrorists use certain areas for safe havens and training camps and identify certain areas as prime targets for repeated attacks. Those territorial areas must therefore have a stronger connection to the zone of combat than others, both geographically and temporally, because the way terrorists use particular areas will naturally change over time.
Taken as a whole and considered in light of existing jurisprudence and policy considerations, these analytical tools form a first step in t