A world of women judges

'Mary's sure got some nice digs.'
'She sure does.' 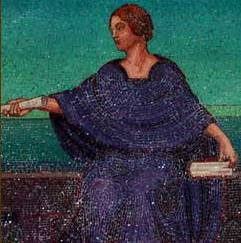 So went a conversation overheard at the just-concluded annual meeting of National Association of Women Judges, held last week in San Francisco. (IntLawGrrl Jaya Ramji-Nogales' post on the 2007 NAWJ conference is here.)
The "digs"?
The 105-year-old building just south of the city's Market Street that houses the U.S. Court of Appeals for the 9th Circuit. On its walls may be found the mosaic at right.
"Mary"?
Presumably, Judge Mary M. Schroeder, who served as the circuit's Chief Judge from 2000 to 2007, the 1st woman to hold that post. Or maybe it was Judge Mary Margaret McKeown, who's served on the same circuit since 1998. Probably not, as she tends to use her middle name -- but perhaps the very fact of confusion says something about growing presence of women on the bench. (In all, 11 women now serve on the 47-member circuit.)

What's more, an event I had the privilege to attend spoke of a globally growing presence.
The event was a reception for 27 international judges -- 26 women and 1 man -- present at the meeting. Making the trip possible for many of them was the generosity of New York attorney Robert M. Kaufman and American Society of International Law (whose greetings ASIL Fellow extraordinaire Preeti Kundra Deshmukh and I were honored to extend).
Welcoming the judges were Alaska Supreme Court Justice Dana Fabe, NAWJ President, and Judge Ramona J. Garrett of the Superior Court of Solano County, California, chair of the 2010 NAWJ International Judges’ Welcoming Committee.
Then followed uplifting reports from many of the international judges about their work at home. Argentina Supreme Court Justice Supreme Court Justice Carmen Argibay told of efforts to curb violence against women. Another reported that in her court 2/3 of the judges were women; they'd become entrenched at a time when compensation did not attract male candidates.

Among those present was the Honorable Leticia Kikonyogo (left), Deputy Chief Justice of Uganda. She'd begun her judicial career as a grade one magistrate in 1973. A children's rights expert who is also a founding member and past President of the International Association of Women Judges (logo bottom right), Kikonyogo now serves as the Head of the Court of Appeal and President of the Constitutional Court in her country.
Also noteworthy was Senior Judge Ihssan Barakat (below left), Judicial Council - Court of Appeal, the 1st woman to serve as a chief of court in Jordan.
Here's the list of all these honorable judges:
Argentina
Supreme Court Justice Carmen Argibay (below right)
Bosnia and Herzegovina