Criticism of a decision to represent a "Yemen-based radical cleric" has drawn the attention of global news media.

► Representing the cleric, Anwar al-Awlaki, who was born in Las Cruces, New Mexico, 36 years ago and is thus a U.S. citizen, are the Center for Constitutional Rights and the American Civil Liberties Union. At the end of August, the 2 nongovernmental organizations filed a challenge to a U.S. decision to target the plaintiff for assassination. Captioned Nasser Al-Alauqi v. Barack H. Obama, the suit is pending in the U.S. District Court for the District of Columbia.
► Criticizing that representation is a CCR board member, IntLawGrrl Karima Bennoune (below left). As reported in London's Guardian and excerpted at Andrew Sullivan's Daily Dish blog, Karima

has gone public with her misgivings at the CCR's decision, reflecting a debate within human rights groups on how to deal with Islamist fundamentalists. 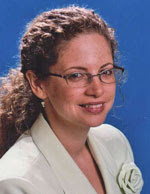 'I support the important work the centre has done on torture and extraordinary rendition,' said Bennoune, 'but I expressed grave concern at CCR offering to represent Awlaki's interests pro bono. Anwar al-Awlaki is not a detainee; he is still at liberty and able to gravely harm others by inciting and advocating murder.'
Bennoune pointed out that Awlaki published an article in al-Qaida's English language magazine, Inspire, in July openly calling for assassinations of several people, including a young woman cartoonist in Seattle and Salman Rushdie. This was at around the time the CCR was offering to represent Awlaki's father, she said.
Bennoune, who is of Algerian descent, also expressed fears that the CCR and the ACLU were in danger of 'sanitising' Awlaki to western audiences.
'Since the inception of the case,' she said, 'there has been increased mystification of who Anwar al-Awlaki is in liberal and human rights circles in the United States. This may in part have resulted from the fact that a highly reputable organisation like CCR was willing to represent his interests, and described him only as "a Muslim cleric" or "an American citizen", and repeatedly suggested that the government did not possess evidence against Awlaki.'

Karima's stance dovetails with that she set out in her recent IntLawGrrls post, On 9/11, Remembering the Other’s Others: International Law & Muslim Fundamentalism, published on the 9th anniversary of the terrorist attacks. As described in the Guardian, Karima's position is further supported by 5 "prominent Algerian non-governmental organisations, including associations of victims of terrorism and women's groups."
by Diane Marie Amann at 2:58 AM