Campaign to Ban FGM Up & Running

More than 100 million girls and women have been subjected to female genital mutilation/cutting (FGM/C) (see here for a taxonomy), primarily in parts of Africa, the Arabian Peninsula (especially Yemen) and Southeast Asia (especially Indonesia and Malaysia). (The map, at right, of the prevalence in Africa and Yemen is from the World Health Organization). Given worldwide patterns of migration, these girls and women, and the practice, are now found all over the world. Three million girls are at risk of the practice every year. Only 19 countries in Africa specifically prohibit the practice, although other countries claim that their laws on assault and battery may be invoked to counter the practice.
In September, 2010, a coalition of non-governmental organizations launched an International Campaign to Ban Female Genital Mutilation. On November 15, 2010, political leaders from 42 countries called for an end to the practice in connection with an appeal placed in the International Herald Tribune. A major goal of the campaign, which has recruited support from a number of "First Ladies" of countries where the practice is prevalent, is to convince the 65th General Assembly to pass a resolution condemning the practice. The theory for seeking a U.N. Resolution is as follows:

A Resolution of the United Nations General Assembly banning female genital mutilation worldwide will be a pivotal moment in the fight to bring an end to the practice, providing the recognition that FGM is a violation of fundamental human rights. The gravity and the dimensions of this violation demand the attention of the international community as a whole and require that international measures be put in place to eliminate it.

A Resolution with an explicit ban on female genital mutilation will help to complete the shift of perspectives on FGM from a problem of "public health" or a "cultural" problem, to its universal recognition as a human rights violation and a form of violence against women.

A resolution is also important, because the major human rights treaties are silent on FGM per se, although there is some euphemistic language that clearly invokes the practice. For example, the Convention on the Elimination of Violence Against Women (CEDAW), with its equality paradigm, makes no mention of violence against women, but Article 5(a) does oblige states parties

To modify the social and cultural patterns of conduct of men and women, with a view to achieving the elimination of prejudices and customary and all other practices which are based on the idea of the inferiority or the superiority of either of the sexes or on stereotyped roles for men and women...

In addition to recognizing "the right of the child to the enjoyment of the highest attainable standard of health," Article 24(3) of the Convention on the Rights of The Child is more pointed than CEDAW; the former obliges states parties to take

all effective and appropriate measures with a view to abolishing traditional practices prejudicial to the health of children.

Similarly, Article 21 of the African Charter On The Rights And Welfare of the Child requires states to

take all appropriate measures to eliminate harmful social and cultural practices affecting the welfare, dignity, normal growth and development of the child and in particular:

a) those customs and practices prejudicial to the health or life of the child; and

(b) those customs and practices discriminatory to the child on the grounds of sex or other status. 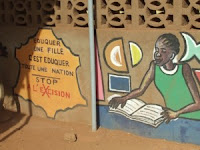 Only the "Moputo Protocol," The Protocol to the African Charter on Human and Peoples’ Rights on the Rights of Women in Africa, names the practice directly when it specifically compels states parties to prohibit

through legislative measures ... all forms of female genital mutilation, removing certain private parts of young girls and women, as well as making scars on their bodies.

You can sign the appeal here. A blog on FGM/C is available here. The image above right (from the Orchid Project, dedicated to banning the practice) states: