Criminal Justice for Gendered Violence and Beyond 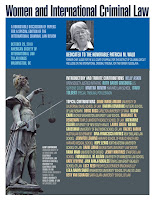 Many of us gathered at the American Society of International Law on October 29th to honor the remarkable Judge Patricia Wald by bringing together our perspectives on women and international criminal law. IntLawGrrls Naomi Cahn and Dina Francesca Haynes, and guest Fionnuala Ní Aoláin (pictured below right) presented our paper on Criminal Justice for Gendered Violence and Beyond, drawing concepts from our forthcoming book, On the Frontlines, to be published by Oxford University Press in September 2011.
In the article, which will be part of a special volume of the International Criminal Law Review edited by IntLawGrrls Diane Marie Amann, Jaya Ramji-Nogales and Beth Van Schaack, we argue: 1) that sexual offenses that arise during and post conflict are not yet sufficiently addressed, 2) that even so, the focus on sex crimes diverts attention from accurately assessing the actual harms perceived by women and 3) that legal reform and post conflict reconstruction should precede the creation of tribunals.
Our responses to sexual offenses committed during and after conflict are still insufficient in multiple ways. Though the jurisprudence of the ICTY and ICTR has taken us some distance,

courts still fail to capture the full range of harms that flow from sexual violence. Furthermore, the successful prosecution of sex based crimes still requires significant external pressure and advocacy, multiple structural barriers still exist with the gathering of evidence and protection of witnesses, and the sentences and number of cases pursued is still disproportionately lower than other wartime offenses. Despite the failures in sufficiently addressing wartime sex based offenses, the focus on sex crimes as the crime associated with women and war diverts attention and resources from properly assessing what women truly perceive as harm and accordingly limit our ability to redress those harms. Finally, the timeline for pursuing prosecutions is not yet in sync with post war “safety.” Tribunals are established before women and victims of war have developed any sense of security. Accordingly, we recommend that legal reform and post conflict reconstruction processes should precede the creation of criminal tribunals.
by Dina Francesca Haynes at 6:16 AM