Go On! Shadi Sadr To Speak on Human Rights in Iran

Each year, Santa Clara University School of Law accepts nominations for and awards the Katharine and George Alexander Law Prize to recognize a person from anywhere around the world

who has used his or her skill, knowledge, and abilities in the field of law to correct an injustice. The hope of the donors is that the Prize will not only give the public a higher regard for the legal profession but will also be an inspiration within the legal profession and a recognition of the good work of so many in the law.

This year's recipient is Shadi Sadr, an Iranian human rights lawyer (right and

below left). The award will be given Thursday, Nov. 11, 2010 at 7:00 p.m. in the Recital Hall of the Performing Arts Center. Her talk is open to the public. More details on the event are available here.

Sadr’s advocacy focuses primarily on women’s rights in Iran. Besides representing journalists, women, and human rights defenders in criminal cases, she co-founded the “Stop Stoning Forever” campaign and established Raahi ("Institution for a Better Life"), an organization that was dedicated to improving women’s rights more generally until it was shut down by the government. Through legal representation and public pressure, she has obtained the release of three women originally sentenced to death by stoning and stopped the

implementation of the same sentence with respect to five other women (although the sentence could be reinstated at any time). Iran (along with Nigeria and Afghanistan) is one of a handful of countries that still allow convicted defendants to be stoned to death, especially in cases involving so-called honor crimes (photo at right, credit).

The contested elections in Iran in 2009 heralded unprecedented public protests and repression by the authorities targeted at human rights defenders, pro-democracy activists, students leaders, and journalists. (See this report by Amnesty International). After demonstrating for Mir-Hossein Mousavi, Sadr was arrested by plainclothed officials and held in solitary confinement. She was released on bail and fled to Germany. She was eventually convicted in absentia for

and sentenced to 6 years in prison and 74 lashes.

In addition to the Alexander prize, Sadr has received other recognition for her work. In March 2010, Sadr received the International Woman of Courage award from the U.S. State Department, an honor initiated by Secretary of State Hillary Rodham Clinton. Sadr declined to attend the award ceremony. Instead, she dedicated the award to Shiva Nazar Ahari, a human rights activist held at the time in Evin prison. Sadr indicated in her recorded speech that she hoped her absence would bring recognition to Ahari's case. Ahari was later released on 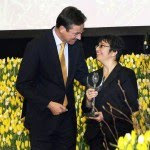 In 2009, she received the Human Rights Defenders Tulip from the Netherlands (left) and, along with three other Iranian women activists, the Lech Walesa prize, given from the Lech Walesa Institute Foundation to a person, institution or social movement that works for solidarity, freedom and democracy. In 2005, Ms. Sadr received the “Ida B. Wells” prize for showing courage in journalism.
Hope to see you there!
by Beth Van Schaack at 5:16 PM