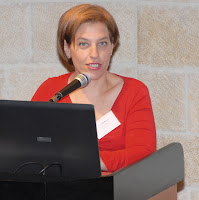 It's IntLawGrrls' great pleasure to welcome Dr. Yaël Ronen (left) as today's guest blogger.
Yaël is an Assistant Professor of Public International law at Sha’arei Mishpat College in Hod HaSharon, Israel. She completed her PhD at the University of Cambridge in 2006, and the revised and updated version of her dissertation, Transition from Illegal Regimes under International Law, will be published by Cambridge University Press in May 2011.
In a 2-part guest series that begins today, Yaël recaps the history of international negotiations over Iran's nuclear program (here), then evaluates proposals for reform of the treaty regime under which they've been conducted (here). Her analysis derives from her just-published book, The Iran Nuclear Issue.
Yaël 's areas of expertise also include statehood and territorial status, humanitarian law, international human rights law and international criminal law. Topics of particular interest, as evident from Yaël's publication list, include the intersection between these areas of law, arising in issues such as whether the International Criminal Court has jurisdiction over acts committed in the Gaza Strip.
Yaël was recently invited as an expert contributor to the Sanela Diana Jenkins Human Rights Project at UCLA School of Law, Human Rights and International Criminal Law Online Forum.
Prior to embarking on an academic career, Yaël served in the Israeli foreign service, both as a lawyer, representing Israel in the United Nations' Sixth Committee and before various human rights treaty bodies, and as a political officer, including a 2-year post in New Delhi, India.
She's also the academic editor of the Israel Law Review, which focuses on scholarship in the fields of human rights, public law and international law and examines the application of legal norms under conditions of conflict and political uncertainty. She welcomes submissions!
She dedicates her contribution to Elizabeth Garrett Anderson (1812–1893). Of Garrett Anderson (below right), sister of Millicent Garrett Fawcett (prior IntLawGrrls post), Yaël writes:

She was the first woman to successfully complete the medical qualifying exams in Great Britain, the first woman physician in Great Britain, an advocate of women's suffrage and women's opportunities in higher education, and first woman mayor in England.
Garrett Anderson’s life is an inspiration not only because she repeatedly broke through gendered glass ceilings; but because she seemed to have managed to be not only ‘anything’, but ‘everything’: she was a professional, an activist, and a dedicated family-person. How did she do it all?

Garrett Anderson joins other IntLawGrrls transnational foremothers in the list just below the "visiting from..." map in our righthand column.
Heartfelt welcome!