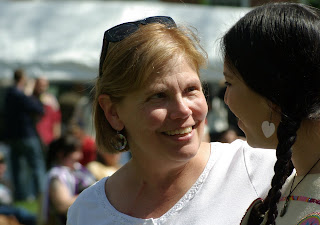 Ellen L. Lutz, an international human rights lawyer, teacher, and activist, died this past Thursday, November 4, at her home in Cambridge, Massachusetts. The cause was metastatic breast cancer. She was 55.
During her final two years battling the disease, Ellen (near right) directed the Cambridge-based human rights organization Cultural Survival, co-edited two pioneering books (Prosecuting Heads of State, (Cambridge U. Press) and Human Rights and Conflict Management in Context (Syracuse U. Press), submitted formal reviews on state behavior to the UN Human Rights Council, led international litigation on behalf of Panama’s threatened Nobe Indians, and sang alto with the Harvard-Radcliffe Chorus. She did each with equal enthusiasm and skill.
Her concern for human rights began when, as a 15-year-old exchange student to Uruguay, she witnessed the onset of Uruguay’s state sponsored “Dirty War,” and supported the international human rights movements such actions spawned across Latin American during the 1970s. After graduating Summa Cum Laude from Temple University (1976) and obtaining a Master’s Degree in Anthropology from Bryn Mawr (1978), Ellen took a Law Degree in International Law and Human Rights from Boalt Hall Law School (University of California at Berkeley) in 1985.
Ellen’s persistent interest in Latin America continued as professional work with Amnesty International (1979-81), in Washington, D.C., and in San Francisco.
She later headed the California office of Human Rights Watch (1989-94), where she conducted research and published on little-known but extensive human rights abuses in Mexico, and she was co-counsel in two groundbreaking human rights cases in U.S. courts, against the infamous Philippine dictator Ferdinand Marcos and Argentine General Suarez-Mason.
Moving with her family to Westborough, Massachusetts, in 1994, she helped to set up and then served as Executive Director of the Center for Human Rights and Conflict Resolution at the Fletcher School of Law and Diplomacy at Tufts University, taught international law. human rights, and mediation at Tufts, Harvard and the University of Massachusetts, and wrote widely. One of her students, now a professor at Occidental College, recalled how

warm and desirous she was of connecting to students amid the formal Fletcher iciness, a marvelous force of nature.

Ellen was asked to become Executive Director of Cultural Survival in 2004, where she increased the participation of indigenous people on the Board of Directors and Program Council, while steering the organization away from local development projects to broad human rights initiatives. Ellen said:

Development work like building schools, digging wells, and providing services is what governments should be doing. Our work is to make sure governments live up to their obligations.

One of her colleagues wrote,

It would be difficult to quantify Ellen’s ferocious passion for justice. Her zeal and natural warm-heartedness combined with a legal rigor that made her a truly formidable advocate.

There was much of such personal and professional praise. But, perhaps the most encompassing and, for Ellen, meaningful compliment came from Stella Tamang, a Nepalese tribal leader and friend:

To Ellen, my Kalyana Mitra,
In Buddhism Kalyana means Wellbeing and Mitra means friend. Kalyana Mitra therefore means friends who always think about their wellbeing. You have been such wonderful friend, a constant support during the problems I was facing about the political problem back in Nepal. We also talked about family, our children, and life. I am blessed to have a friend like you. We believe that if a person has done good Karma, he or she gets to meet with wonderful people, and you are the one for me...

And Ellen was not a Buddhist. Ellen is survived by her husband, Theodore Macdonald, an anthropologist previously with Cultural Survival and now with Harvard University, and her two children from a previous marriage, David and Julia Randall, now studying at the University of Massachusetts and Harvard, respectively. Her cat, Misty, and dog, Churi, are well taken care of. Her friends, among them many women human rights lawyers, are grateful to her for her wise counsel and unflagging dignity. All are thankful to their Kalyana Mitra.
by Naomi Roht-Arriaza at 2:14 AM