Almost 65 years to the day after an Allied effort began at Nuremberg, a permanent museum chronicling the Trial of Major War Criminals and subsequent proceedings is now open.
Inauguration of the Memorium Nürnberger Prozesse/Nuremberg Trials Memorial (above right) took place yesterday. (photo credit) Featured were comments by:
► Representatives of the 4 countries that comprised the International Military Tribunal: for Britain, Attorney General Dominic Grieve; for France, former Foreign Minister Roland Dumas; for Russia, Foreign Minister Sergey Lavrov; and for the United States, Ambassador-at-Large for War Crimes Stephen J. Rapp.
► A representative of Germany, 2 dozen of whose nationals were defendants at the year-long 1st trial: Foreign Minister Guido Westerwelle.
► A representative of the Nuremberg prosecutors, Benjamin B. Ferencz. Ferencz served as Executive Counsel at the dozen subsequent Nuremberg trials conducted by the United States, and lead prosecutor at one of them, the Einsatzgruppen Case.
This week, additional commemorative events will unfold (alas, nothing honoring women at Nuremberg).
And from now on, visitors can tour the museum, located in the Palace of Justice at Bärenschanzstraße 72, from 10 a.m. to 6 p.m. Wednesdays through Mondays. Among the 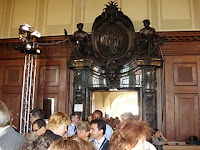 artifacts in the exhibition is the dock that held the former leaders of the Third Reich; it'd been in storage for decades. Courtroom 600 (right), where the trial occurred and which this 'Grrl was honored to visit a few years back, is still a working chamber and so will be open only when court is not in session.
Details here.
by Diane Marie Amann at 6:00 AM