(My thanks to IntLawGrrls for the opportunity to contribute a 2-part series of guest posts. Part 1 is below) 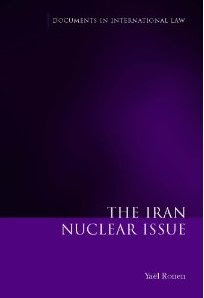 The recent announcement that Iran is willing to resume negotiations over its nuclear activities presents an opportunity to recap the development of the conflict over this issue, which erupted over eight years ago.
This conflict and its legal implications are considered in my book The Iran Nuclear Issue (Hart Publishing, 2010), on which this series of guest posts draws. In addition to a legal analysis, the book contains a detailed chronology and the texts of documents which underlie the evolution of the conflict.
In August 2002, an Iranian opposition group revealed the existence of two previously undisclosed nuclear facilities under construction in Iran.
In December 2002, the United States published satellite pictures of the two facilities, as proof of its long-held suspicions that Iran was pursuing both weapons of mass destruction and long-range missile capabilities.
Iran reacted by stating repeatedly that it was committed to the prevailing international legal regimes on weapons of mass destruction, including the 1968 Treaty on the Non-Proliferation of Nuclear Weapons. Iran contended that its commitment derived not merely from its contractual obligations but, more importantly, from its religious convictions and historical experience. Iran maintained that its programme, which was aimed at mastering the complete fuel cycle, was intended solely to support a civilian nuclear energy programme. It explained that it had operated clandestinely because of obstructions, by the United States and other countries, to its overt activities.
Suspicion nonetheless arose and increased among various states, and the matter was taken up by the International Atomic Energy Agency, which began an intensive inspection and verification operation in Iran. The Agency found that Iran had made substantial efforts over the previous two decades to master an independent nuclear fuel cycle, and was carrying out research and development activities related to the treatment, storage and disposal of radioactive waste.
In June 2003, and several times subsequently, the Atomic Energy Agency declared that Iran had failed to comply with obligations under its bilateral Non-Proliferation Treaty Safeguards Agreement.
Calls ensued, on the one hand, to take decisive measures against Iran, including referral to the U.N. Security Council, and on the other hand, to give Iran a chance to rectify its conduct.
Amid this debate, the United Kingdom, France, and Germany -- the EU3 -- undertook to negotiate directly with Iran. In October 2003, the two sides issued the Tehran Statement, in which Iran agreed to cooperate fully with the Atomic Energy Agency in order to settle all outstanding issues and to correct any failures to comply with its Safeguards Agreement. The EU3, meanwhile, informed Iran that if it complied with its commitments, the EU3 would not seek referral of Iran’s dossier to the Security Council.
In mid-2004, Iran resumed work on uranium conversion.
To defuse the crisis that followed, the EU3 engaged again in negotiations with Iran; overall, however, those negotiations did not result in any change of policy. Both sides expressed disappointment with what each deemed the other’s broken promises, procrastination, and bad faith.
The EU3 consequently aligned with the United States, which had already been pressing the International Atomic Energy Agency Board of Governors to refer the Iranian issue to the Security Council. This Board urged Iran to re-establish full, Agency-verified suspension of all enrichment-related and reprocessing activities, including research and development.
In January 2006, Iran began to enrich uranium in centrifuges at its Natanz plant. In reaction, the Agency's Board of Governors referred the Iran dossier to the Security Council, which has since adopted six resolutions under Chapter VII of the Charter of the United Nations. These resolutions imposed enforcement measures on Iran until it complied with the previous demands of the Security Council and the requests of the Board of Governors. The resolutions further added the suspension of work on all heavy-water-related projects, including

the construction of the heavy-water research reactor in Arak (left). (photo credit) Enforcement measures include:
► A trade embargo on items and technologies which could contribute to the activities Iran was ordered to suspend; and
► A travel notification requirement and asset freeze with respect to designated individuals and entities involved in the activities Iran was ordered to suspend.
In August 2007, the Agency Secretariat and Iran negotiated a work plan to address a limited number of issues regarding Iran’s past nuclear programme. Outstanding issues have largely been addressed. But the Agency is still requesting that Iran:
► Account for and explain a series of documents found in its possession which point to nuclear weapons-related research; and
► Respond fully to queries on weapons studies that Iran had allegedly conducted. Iran denies the existence of any such studies.
These outstanding issues -- in addition to Iran’s continued refusal to suspend uranium enrichment and construction of the heavy-water reactor and adhere to the Additional Protocol -- form the basis upon which the Security Council maintains the Iran dossier and pursues sanctions against Iran.
Iran, however, argues that the work plan issues have been resolved satisfactorily. It further argues that even under the Security Council’s own terms, there is no basis for continuing the sanctions regime or for maintaining the Iran case before the Security Council. Iran claims that nothing short of its total capitulation will satisfy the Western powers, and regards this as extortion.
Others accuse Iran of being the one engaging in blackmail, in its demand for economic assistance permitted under Articles III and IV of the Non-Proliferation Treaty and for the release of sanctions as conditions for returning to the path of non-proliferation. Western states argue that, given Iran’s past record of concealment and its overall policy, Iran cannot benefit from the doubt as to its ultimate goal. It seems that any stance adopted by Iran which falls short of complete acquiescence is regarded not only as an act of defiance but also as an indication that Iran has something to hide.