Not so fast toward the EU? 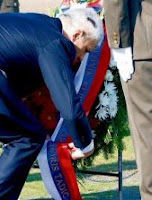 'Our children must not be burdened by policies of the 1990s.'

So said Serbian President Boris Tadić a few days ago, while laying a wreath near Vukovar, Croatia, where Serb forces executed more than 200 hospital patients as part of a 3-month siege in which more than 1,000 Croats were killed, 5,000 civilians seized, and 22,000 non-Serbs expelled. (credit for Reuters photo)
Tadić said he had come

to pay respect to the victims, to say words of apology, to show regret and create a possibility for Serbia and Croatia to turn a new page.

Part of that post-atonement chapter, Serbia hopes, is European Union membership, so that Serbia no doubt welcomed subsequent EU and the U.S. State Department comments heralding the visit as a welcome step toward reconciliation.
But the move brings to mind the objection that Serge Brammertz (below right), Chief Prosecutor of the International Criminal Tribunal for the former Yugoslavia, raised regarding any plan to allow EU admission while ICTY indictees like former Bosnian Serb General Ratko Mladić remain at large. As we've posted, Brammertz has said:

Be sure to ask countries to support the tribunal. There is a tendency to think, 'Let's move on. Let's take the countries into the international community. We are saying, 'There can be no compromise. There can be no alternative to bringing the fugitives to justice.'