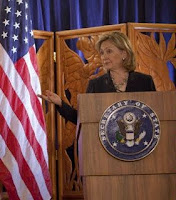 Diplomacy has long been the backbone of U.S. foreign policy. It remains so today. The vast majority of my work at the State Department consists of engaging in diplomacy to address major global and regional challenges, such as confronting Iran's nuclear ambitions, facilitating negotatiations between the Israelis and the Palestinians, enhancing stability on the Korean Peninsula, and working with other governments to bring emergency relief to Haiti, And President Barack Obama and I certainly relied on old-fashioned diplomatic elbow grease to hammer out a last-minute accord at the Copenhagen conference on climate change last December.

-- U.S. Secretary of State Hillary Clinton, in "Leading Through Civilian Power: Redefining American Diplomacy and Development." (credit for October 2010 photo) Clinton develops her wide-ranging exposition of the global work at State and myriad other agencies around the theme of her own initiative, "the first Quadrennial Diplomacy and Development Review (QDDR), a wholesale review of the State Department and USAID." The article appears in the November/December 2010 Foreign Affairs, a "special issue" on the topic of "The World Ahead." Some of the other articles are of interest, but the lineup as a whole discomfits: if it weren't for Secretaries of State (Clinton and her predecessor, Madeleine Albright), there'd be virtually no women authors in the entire issue. We, too, think deeply about the world to come.
by Diane Marie Amann at 6:00 AM