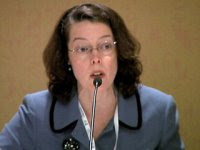 The United States is putting on the pressure to expand the scope of U.S. drone operations, but getting nowhere, according to reports published in the last couple days.
For readers trying to figure out this hot-button global issue, there's The International Law of Drones, a new ASIL Insight by IntLawGrrl guest/alumna Mary

Ellen O'Connell (prior posts).
In the Insight, Mary Ellen traces the history of unmanned aerial vehicles, or UAVs, as drones officially are called. (UAV photo credit; O'Connell photo credit)
Then she describes how they've been used as weapons -- since the 1st U.S. attack, launched from Djibouti into Yemen, in 2002 -- through to current deployment at the Afghanistan-Pakistan border.
Next she tries to fit the issues surrounding such uses into the framework of international law respecting the use of force; that is, term-of-art concepts such as "armed conflict," "armed attack," and "self-defense."
Finally, Mary Ellen points to a need for greater research, particularly on the psychological effects that drone warfare has on those who wage it.
Well worth a read.
by Diane Marie Amann at 3:00 AM