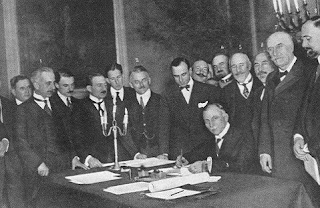 On this day in ...
... 1920 (90 years ago today), at a town near Genoa, the Treaty of Rapallo was signed (right) by the Kingdom of Serbs, Croats, and Slovenes and the Kingdom of Italy. (ohoto credit) By the terms of the treaty a number of territories, containing populations of varying ethnicities, were annexed to Italy. An independent state known as Fiume also was established; later it became part of Yugoslavia.