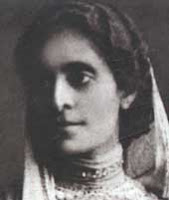 On this day in ...
... 1866, Cornelia Sorabji (right) was born into a family of 9 children in what was then called the Bombay Presidency in India. Her father was a Parsi Christian missionary; her mother, the founder of schools for girls. Following her own education in India, in 1892, Sorabji was specially permitted to take the examination for a Bachelor of Civil Laws Oxford University -- the 1st woman ever to do so. She returned to India 2 years later and began a career concentrated on changing laws that discriminated against women. Among her many books were Between the Twilights: Being Studies of Indian Women by One of Themselves (1908) and India Calling: The Memories of Cornelia Sorabji, India's First Woman Barrister (published posthumously in 2001). After retirement she moved to London, where she died in 1954. As IntLawGrrl guest/alumna Mary Dudziak posted recently at her Legal History Blog, Sorabji's life is the subject of an article by Professor Mary Jane Mossman of Osgoode Hall Law School at York University in Toronto, Canada.