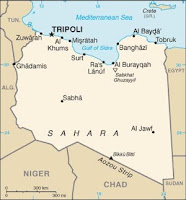 On this day in ...
... 1950 (55 years ago today), the U.N. General Assembly moved Libya a step closer to independence when it adopted Resolution 387(V). The resolution acknowledged the work undertaken toward that end by the U.N. Commissioner in Libya. It called for "early, full and effective implementation" of a 1949 resolution stating that the North African land -- various portions of which had been subjected to rule by Italy, France, and Britain -- "shall be constituted a united and independent sovereign state." Libya would declare independence a little over a year later, on December 24, 1951, and thus become

the first country to achieve independence through the United Nations and one of the first former European possessions in Africa to gain independence.