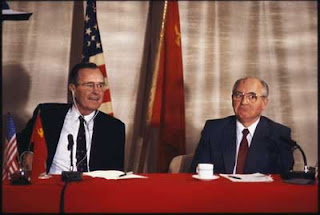 On this day in ...
... 1990 (20 years ago today), at a summit meeting in Paris, leaders of more than a score of countries signed an agreement billed as "the end of the cold war that divided East and West for more than four decades." The agreement between the member states of NATO, the North Atlantic Treaty Organization, and those of the Warsaw Pact promised to destroy "tens of thousands" of "nonnuclear weapons." Signing along with U.S. President George H.W. Bush was Soviet President Mikhail S. Gorbachev. (credit for photo of the 2 leaders at a 1989 Malta summit) At the signing in Paris, the latter proclaimed:

'What a long way the world has come!'

A thought worth pondering given the current, new uncertainties about the fate of New START, the disarmament pact we've been tracking (prior IntLawGrrls posts).