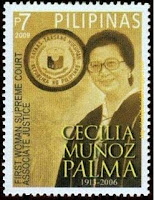 On this day in ...
... 1913, Cecilia Muñoz-Palma (right) was born in Bauan, Batangas, the Philippines.
She was valedictorian at St. Scholastica's College and earned a bachelor of laws degree from the University of the Philippines in 1937 -- the same year that she placed 1st on her country's bar examination. She founded the Woman Lawyers’ Association of the Philippines (WLAP) Free Legal Aid Clinic. In 1954, she earned a master of laws degree at Yale. That same year she became a local judge in the Philippines. In 1968 she served as President of the Philippines' Constitutional Commission, which drafted the 1987 Constitution, and also was elevated to the country's Court of Appeals. She served as an Associate Justice of the Supreme Court of the Philippines -- the 1st woman on that high court -- from 1973 until her 65th birthday, on this day in 1978. Among her publications is a 2001 collection of speeches, entitled Mirror of My Soul. Justice Muñoz-Palma died in 2006.