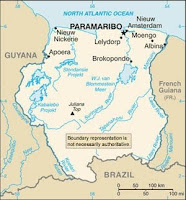 On this day in ...
... 1975 (35 years ago today), Suriname won independence, with Dutch consent, nearly 21 years after it had become "an autonomous part of the Kingdom of the Netherlands," and more than 300 years after it had become a colony of that European country. Today the country (map at right), about the same size as the U.S. state of Georgia and located at the northeastern coast of South America, is a republic with nearly half a million inhabitants. Its largest population bloc, at 27% is Hindustani (East Indian).