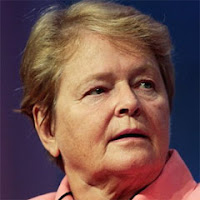 On this day in ...
... 1994, in what the BBC called "a blow for Prime Minister Gro Harlem Brundtland" (left), voters for a 2d time rejected Norwegian membership in the European Union. Turnout was high -- 80% -- and the margin of victory was nearly 5 percentage points. After the 1st loss, she had resigned; this time she stayed on, waiting another 2 years before resigning as Norway's leader. Thereafter, from 1998 to 2003, Dr. Brundtland, a physician, was the Director-General of the World Health Organization. Norway remains outside the EU to this day.