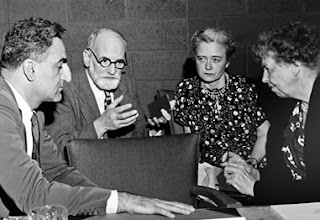 On this day in ...
... 1898, Dr. Marjorie M. Whiteman was born in Liberty Township in southern Ohio. After graduating from Ohio Wesleyan University, she earned her LL.B. and J.S.D. degrees from Yale. Her lifelong "distinguished career at the Department of State" included advising Eleanor Roosevelt from 1945 to 1951, when the former 1st Lady was the U.S. Representative to the U.N. General Assembly and chair of the U.N. Commission on Human Rights. (credit for photo of Whiteman, 2d from right, along with 3 Commission members; from left, Charles Malik of Lebanon, René Cassin of France, and Roosevelt) Whiteman also served as advisor to 10 different Secretaries of State. According to this website,

In 1985, she became the 2d woman to receive the Manley O. Hudson Medal, awarded by the American Society of International Law for scholarship and achievement in international law. Whiteman died at her Liberty Township home a year later.