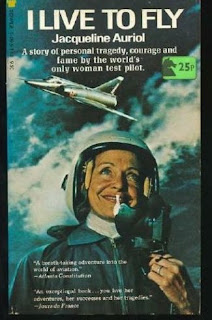 On this day in ...
... 1917, a daughter, Jacqueline Marie-Thérèse Suzanne Douet, was born into a weathy family in Challans, a town southwest of Nantes, France. After completing university and art studies, she married the son of a Socialist Party leader, became known as Jacqueline Auriol, and gave birth to 2 sons. During World War II she aided the French Resistance. Becoming a pilot at war's end, Auriol is known as "France's most distinguished aviatrix." Among her achievements, for which she was admitted to the Legion d'Honneur: "the world's first woman test pilot"; setting of "a new women's speed record"; and "second woman to break the sound barrier"; and "one of the first pilots to fly the supersonic Concorde." She did humanitarian work, too:

Madame Auriol worked with the Ministere de la Cooperation, using remote sensing techniques to gather information for agricultural development. The United Nations Food and Agriculture Organization presented her with the Ceres Medal for her significant contributions.