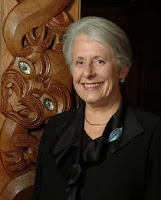 On this day in ...
... 1943, Silvia Rose Cartwright (right) was born in Dunedin, New Zealand. She studied at the Otago Girls' High School in the same town, as well as the University of Otago, from which she earned her LL.B. degree in 1967. Since then, she's served as the 1st woman Chief District Judge, the 1st woman on New Zealand's High Court, and the 2d woman Governor-General of New Zealand. On the last post, WikiPedia writes:

Dame Silvia's term as Governor-General was from 4 April 2001 to 4 August 2006. This was the first (and so far only) time when the Monarch (Elizabeth II), Governor-General, Chief Justice (Dame Sian Elias), Speaker of the House (Margaret Wilson) and Prime Minister (Helen Clark) of a Commonwealth Realm were all female.