At 2:30 p.m. Hague time tomorrow, Trial Chamber III of the International Criminal Court is scheduled to begin trial in Prosecutor v. Jean-Pierre Bemba, a case about which IntLawGrrls frequently have posted.
In this guest post, I set forth the allegations against the accused, which the Office of the Prosecutor intends to prove through evidence adduced in the course of this trial.
Between October 2002 and March 2003, the troops of the MLC, or Mouvement de Libération du Congo, under the command of Jean-Pierre Bemba (below right), crossed the border from the Democratic Republic of Congo into the Central African Republic. The MLC troops' primary mission, we allege, was to terrorize anyone who was perceived as an enemy or a supporter of the enemy. The enemy in this case was the rebel group fighting against the then-President of the Central African Republic, Ange-Félix Patassé.
Persons suspected of support were innocent civilian men, women and children. The weapon of choice was rape.
It is our contention that in a systematic and organized manner, the MLC troops undertook a targeted and deliberate mass campaign of rape and sexual violence. Women and young girls, men in positions of authority, community leaders, and protectors, were brutally raped in front of their families or in public.

As planned, we allege, by the accused Bemba, the impact of the emotional and physical devastation of rape went beyond the individual scale. It extended to entire communities. These communities became powerless as their dignity, their social structures, and their way of life wer being destroyed. Community leaders lost their standing. Parents watched helplessly as their children were raped. And many victims were infected with HIV. For those who attempted to resist, death was the only option.
In the face of the impunity that for too long has characterized sexual and gender crimes, the opening of the ICC’s investigation into the situation in the Central African Republic is a turning point. Building on the important work of the International Criminal Tribunal for Rwanda regarding the criminal characterization of sexual crimes, the ICC’s investigation is the first time that the international criminal justice system chose to address a situation where allegations of sexual crimes far outnumber alleged killings.
The Bemba trial is also another milestone for its novel use of command responsibility doctrine. A military commander is being prosecuted by an international court for failing to properly control his troops, and for not preventing them from committing massive sexual crimes:
► The prosecution will demonstrate that as sole President and Commander-in-Chief of the MLC, Jean-Pierre Bemba failed in his duties as a military commander to prevent, repress and punish crimes of rape, murder and pillage committed by his MLC forces against civilians in the Central African Republic.
► We allege that Bemba knew that his MLC forces were committing or about to commit these crimes, but he chose not to act. In the limited instances when Bemba did choose to act, despite an attempt to create the impression of bona fide measures, his actions were in fact designed to cover-up the crimes; minimize the gravity of the crimes; and allow his subordinates to escape 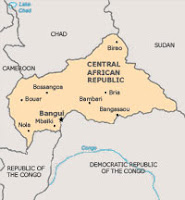 justice.
We in the Office of the Prosecutor believe that the trial against the accused Bemba will have a broad impact regardless of its outcome in the courtroom. It will send a strong signal to military commanders around the world: they can and will be held accountable for their failure to contain violence within the bounds of the law, including sexual violence committed by individuals under their command.
by Olivia Swaak-Goldman at 4:30 AM