The U.S. Says It Is Not Its Goal to Undermine the ICC 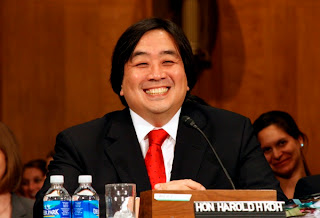 At a recent panel discussion at the NYU Center for Global Affairs on the Challenges and Future of International Justice, Harold Hongju Koh, Legal Advisor to the Department of State (left) (photo credit) stated that it was not the policy of the United States to frustrate the object and purpose of the Rome Treaty.

Koh's statement came in response to a comment by Sang-Hyun Song, President of the ICC (below right), about the United States' "positive engagement" with the Court. In invoking President Barack Obama's national security strategy promoting the end of impunity and the promotion of justice as moral imperatives and stabilizing influences in international affairs, Koh stated:

What you quite explicitly do not see from this Administration is U.S. hostility towards the Court. You do not see what international lawyers might call a concerted effort to frustrate the “object and purpose” of the Rome Statute. That is explicitly not the policy of this Administration. Because although the United States is not a party to the Rome Statute, we share with the States Parties a deep and abiding interest in seeing the Court successfully complete the important prosecutions it has already begun.

In addition to explicitly renouncing any such policy to frustrate the object and purpose of the ICC Statute, Koh noted that the Obama Administration had "ended the hostility and the harsh rhetoric" vis-a-vis the Court and pledged support for the Court's ongoing prosecutions.

These comments raise the question of whether Koh has said the magic words necessary to essentially withdraw a 2002 letter by which a U.S. official purported to "unsign" the Rome Treaty. Although the impact of the United States' purported "unsigning" of the Rome Treaty establishing the ICC remains contested, there is little question that Koh's remarks address the most important implication that some have read into the Bolton letter: that it was the policy of the U.S. to engage in a concerted effort to frustrate the "object and purpose" of the Court.

By way of background, President William J. Clinton in the waning days of his Administration signed the Rome Treaty on December 31, 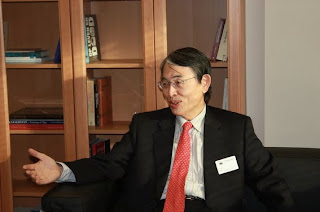 2000, the final day it was open for signature. At that time, President Clinton did not recommend that his successor submit the Treaty to the Senate for advice and consent until the United States’ fundamental concerns were addressed, most notably the ability of the Court via an unaccountable prosecutor to exercise jurisdiction over the nationals of non-states parties. The subsequent retraction of this signature purportedly was accomplished by a terse letter from John Bolton, when he was President George W. Bush’s Undersecretary for Arms Control and International Security, to Kofi Annan, then-Secretary-General of the United Nations. The letter stated:

This indication of an intent not to ratify the treaty was said to be needed to remove any obligation of the United States to refrain from acting contrary to the object and purpose of the treaty as required by its signature of the treaty. Article 18 of the Vienna Convention on the Law of Treaties states:

A State is obliged to refrain from acts which would defeat the object and purpose of a treaty when: (a) it has signed the treaty or has exchanged instruments constituting the treaty subject to ratification, acceptance or approval, until it shall have made its intention clear not to become a party to the treaty...

(Although the United States has signed but not ratified the Vienna Convention, U.S. officials regularly indicate that they accept that much of the Convention reflects binding customary international law). Pierre Prosper, then U.S. Ambassador for War Crimes Issues, later indicated that the United States would not be in a position to assist the Court's investigations. See here and here for our prior discussions of efforts to "unsign" treaties, a common but inapt metaphor given the actual content of the Bolton letter and the terms of the Vienna Convention. (Incidentally, the U.N. website still lists the United States as a signatory to the Rome Treaty with a footnote reproducing the text of the Bolton letter.)

By formally indicating an intent not to ratify the Rome Treaty, the U.S. was thus free to take measures that might be interpreted as "acts which would defeat the object and purpose of the treaty" by undermining the treaty regime—such as the passage of the American Servicemembers Protection Act or the pursuit of Article 98 immunity agreements with other states—without running afoul of its Article 18 obligations. Although the U.S. has now renounced any intention or policy to undermine the Court, it is no doubt premature to assume the United States intends to ratify the treaty, and, of course, the statement does not imply that it will.

In addition, Koh's statement at NYU made other key points. Specifically, Koh:

► Restated the United States' support for all of the Court's prosecutions that are currently under way.
► Raised lingering and pressing concerns about the aggression amendments to the ICC and particularly the interaction between Article 121(5), which applies to the aggression amendments, and the opt-out provision adopted in Kampala, which allows states parties to opt out of the aggression amendments (See here and here for our prior posts on this).
► Highlighted several additional challenges facing the system of international justice:

For more on U.S. cooperation with the ICC, see prior posts here and here. The full text of Koh's statement at NYU is available here.
by Beth Van Schaack at 5:57 AM