(Occasional sobering thoughts.) It's been a week for "surprise" visits to conflict zones: U.S. President Barack Obama to Afghanistan's Bagram Air Base in Afghanistan, German Foreign Minister Guido Westerwelle to Iraq's officials, in Baghdad. Can't help but wonder the degree to which recent leaks about attitudes toward world leaders prompted the face time. 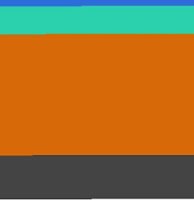 Also worth pondering is the image at left. Not a poor imitation of Rothko, but rather a color-coded charting of deaths in Iraq. Orange = civilians.
With that in mind, here's the casualty count since our last such post 6 weeks ago:
► The U.S. Department of Defense reports that coalition military casualties in Afghanistan stand at 1,416 Americans, 345 Britons, and 484 other coalition servicemembers. That's an increase of 68, 4, and 5 casualties, respectively, in the last 6 weeks. The total coalition casualty count in the Afghanistan conflict is 2,245 service women and men.
► Respecting the conflict in Iraq, Iraq Body Count reports that between 99,021 and 108,094 Iraqi women, children, and men have died in the conflict in Iraq since the U.S.-led invasion in March 2003. That represents an increase of between 436 and 500

persons since 6 weeks ago. According to the U.S. Defense Department, 4,429 American servicemembers have been killed in Iraq, representing 3 servicemember deaths in the last 6 weeks. (As posted, U.S. troops are the only foreign forces remaining in Iraq.)
by Diane Marie Amann at 6:00 AM