'There's peace in Liberia, but peace is fragile.' 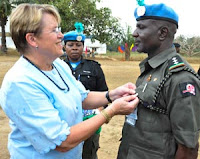 So says Ellen Margrethe Løj (left), since 2007 the U.N. Special Representative for Liberia. (credit for photo of Løj pinning U.N. medal on Nigerian peacekeeper) Formerly a career diplomat in Denmark, Løj served as the Danish Permanent Representative to the United Nations from 2001 until shortly before her appointment to the Liberia post.
Løj's comment was published yesterday, in a San Francisco Chronicle editorial entitled "U.N. role works as peacekeeper in Liberia." The editorial was among several items in the Chronicle's examination of how things stand in 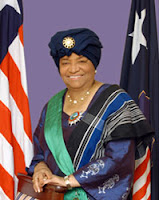 Liberia years after the end of active civil war 7 years ago. The series anticipates balloting next year, during which Ellen Johnson Sirleaf (right; prior IntLawGrrls posts), President since 2006, will vie for re-election. Other articles include:
► An overview of post-civil war Liberia;
► Efforts to reintegrate ex-child soldiers;
► The past, present, and future role of women as peacemakers;
► The challenge of disputes over land; and
► Labor at a Firestone factory.
All well worth the read.