Gender Report Card on the ICC 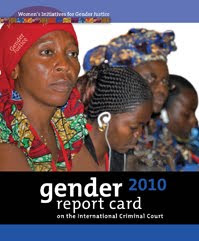 (Delighted to welcome back alumnae Brigid Inder and Kate Orlovsky, who contribute this guest post)

During the 9th Session of the International Criminal Court Assembly of States Parties, held earlier this month in New York, Women's Initiatives for Gender Justice, the Hague-based nongovernmental organization at which we work, launched its Gender Report Card on the International Criminal Court, 2010.
The launch was one of the first events to be co-hosted by UNIFEM, the United Nations Development Fund for Women, as part of UN Women, the new agency for women headed by former Chilean President Michelle Bachelet (prior IntLawGrrls posts). Attending were representative of the ICC and its states parties, the United Nations, and various NGOs. Speakers included Margot Wallström (middle right), formerly a public official in Sweden and Europe, who was appointed the U.N. Special Representative of the Secretary-General for Sexual Violence in Conflict earlier this year; Joanne Sandler, Deputy Executive Director of UNIFEM; and one of us, Brigid Inder, Executive Director of the Women's Initiatives for Gender Justice.
In her speech, Brigid called attention to 2010 as a year of '"firsts":
►For the first time charges of genocide were included in an arrest warrant -- and these included acts of rape and sexual violence. 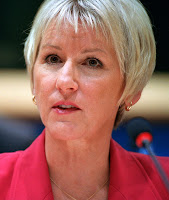 ►The ICC began its first trial, in Prosecutor v. Bemba, in relation to crimes committed in the Central African Republic.
►The Court heard its first witness to provide testimony in relation to charges of sexual violence. 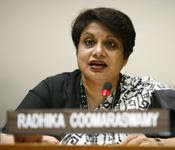 ►The first expert witness to address gender-based crimes appeared before the ICC. This expert was Radhika Coomaraswamy (right), the Special Advisor to the U.N. Secretary-General on Children and Armed Conflict. (photo credit) In the trial of Prosecutor v. Thomas Lubanga Dyilo (prior posts), Coomaraswamy provided insight into the gender dimensions of the enlistment and conscription of child soldiers.
►For the first time three participating victims were also enabled to testify.
►An all-women bench is presiding a trial at the ICC. This is a first in any of the international tribunals.
►For the first time, as described in IntLawGrrls posts available here, the Prosecutor exercised proprio motu powers by issuing summonses in relation to the 2008 post-election violence in Kenya.
For states parties it was also a year of firsts:
► At this summer's Review Conference in Kampala, the Assembly of States Parties adopted proposed amendments on the crime of aggression that clearly define the crime -- a crime that, in time, individuals will be held accountable by the ICC.
►Four more states became states parties, bringing the total number of members to 114.
There were some unexpected developments during 2010, such as the second stay of proceedings in the Lubanga case.
Nevertheless, women around the world are supporting and urging the ICC to prosecute gender-based crimes with vision and direction, with determination and purpose, and with clarity about the ICC's intention to contribute to justice for women.
The Women's Initiatives' Gender Report Card analyses the institutional developments of the ICC throughout 2010, as well the ICC's substantive work and jurisprudence. The review of the ICC's substantive progress includes:
► An examination of the investigation and prosecution strategy of the Office of the Prosecutor; and
► An overview of trial proceedings and analysis of key judicial decisions. The focus is on cases where gender-based crimes have been charged or where these issues have arisen during the legal proceedings, as well as on those decisions affecting victims and witnesses appearing before the Court.
In short, the Gender Report Card provides the most comprehensive gender analysis of the ICC currently available.

by Brigid Inder + Katharine Orlovsky at 9:00 AM