Going Back to Baghdad 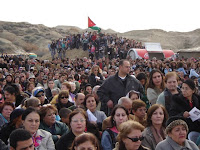 Two recent reports, one by the International Organization for Migration and one by the US Government Accountability Office, describe the situation of returning Iraqi refugees and internally displaced persons, and it's not a pretty picture. While the overall security situation in Iraq has improved, attacks continue to occur, particularly in Baghdad, Diyala, and Ninewa governorates -- from whence ninety percent of recent Iraqi IDPs originate. Of the 1.6 million Iraqis displaced since 2006, less than half have returned home.
Those who do return face a grim existence. Returnees find it hard to secure shelter, let alone property restitution or compensation. One-third of the heads of returnee families are unemployed, and many lack adequate essential services such as food, water, sanitation, electricity, and health care. Violence against women and minorities occurs often and is rarely punished.
The IOM found that these challenges were exacerbated for female-headed households (see prior post). Over eighty percent of female heads of households are unemployed. Many of these families include children and elderly members, which leads forty percent of them to rely on others for assistance. One in four female-headed households lack access to health care and the same number include a family member with a chronic illness. Nearly three-quarters cite food as an urgent need. As domestic violence has increased in Iraq in recent years, many of these women have fled their husbands and must contend with the resulting psychological burdens and social stigmas.
While numerous projects have been established to address impediments to return, the GAO found significant coordination and strategic gaps. To start, the impact of these projects on reintegration is not consistently measured or reported, in part because American goals and outcomes are classified and Iraqi government efforts suffer from insufficient commitment and capacity.
At the international level, there is no integrated strategy to coordinate the various UN organizations and internationally funded assistance efforts. Basic definitional questions such as when the displaced are considered reintegrated have yet to be answered. There are troubling holes in the data gathered by these agencies; for example, nobody has taken inventory of and assessed financial assistance programs for IDPs and returnees to determine gaps, overlap, and impact. And there is turf warfare, with different UN bodies competing rather than coordinating there efforts. In one example, UNHCR has not shared its raw data on IDPs and refugees with other entities working in Iraq.
In short, it's a mess -- one that we helped to create and should help to resolve. As the GAO suggests, the Secretary of State and the USAID Administrator in Iraq should assist the Iraqi government in creating a coherent and integrated international strategy to reintegrate displaced Iraqis. In order to spur successful voluntary return, such a plan must not only overcome current coordination failures but should also address the particular needs of female-headed households and other vulnerable groups.