It's IntLawGrrls' great pleasure to welcome Caitlyn Antrim (left) as today's guest blogger.
Caitlyn's the executive director of the Rule of Law Committee for the Oceans and publisher of the "Ocean Law Daily," a newsletter focused on the U.N. Convention on the Law of the Sea, its relation to U.S. national interests, and prospects for approval by the U.S. Senate. She discusses those prospects in her guest post below.
Caitlyn began studying law of the sea under Harvard Law School Professors Louis Sohn and Richard Baxter at the same time she was earning the professional degree of Environmental Engineer at the Massachusetts Institute of Technology. She credits this dual track for preparing her for translating and mediating between lawyers and engineers, developed and developing countries, and other cultural clashes in international ocean and environmental policy debates.
After graduation she joined the government, representing the Commerce Department and NOAA, the National Oceanic and Atmospheric Administration, on the U.S. delegation to the Law of the Sea Conference. Since then, she has served on delegations and secretariats at the U.N. Conference on Environment and Development and the Convention on Drought and Desertification. She's also worked for the Congressional Office of Technology Assessment, the American Academy of Diplomacy, and the National Academy of Sciences, all the while keeping involved in the progress of the law of the sea convention. 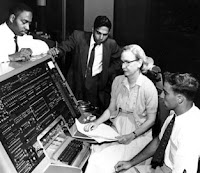 Caitlyn has published articles on law of the sea, strategic minerals, negotiation theory and practice and, most recently, the emerging regime for the Arctic. A loyal blogreader, Caitlyn nominated an IntLawGrrls transnational foremother years ago: Dr. Grace Murray Hopper (right) (photo credit), a Navy officer who developed the computer language COBOL.
Heartfelt welcome!
by Diane Marie Amann at 7:00 AM