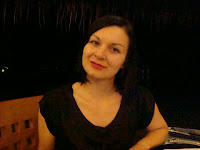 It's IntLawGrrls' great pleasure to welcome Ioana Cismas (right) as today's guest blogger.
Ioana is a researcher with the Project on Economic, Social and Cultural Rights at the Geneva Academy of International Humanitarian Law and Human Rights in Switzerland. She is further offering legal support to one of the members of the Advisory Committee of the UN Human Rights Council. She's also been an adviser to the Romanian Minister of European Integration. Ioana has previously worked in the research and policy analysis units of nongovernmental organizations and research centers, focusing on humanitarian engagement of nonstate actors and on corporate complicity in international crimes. As a doctoral candidate in international law at the Graduate Institute of International and Development Studies in Geneva, Ioana is exploring the rights and obligations under international law of religious actors, state and non-state. She aims to propose an accountability framework for religious actors.
Ioana holds a master's degree in international affairs from the Graduate Institute and a double bachelor's degree in political science and sociology from the National School of Political Studies and Public Administration in Bucharest, Romania.
Ioana examines the question of remedial secession as it applies to Kosovo in her guest post below. In so doing, she builds on the article she published earlier this year in the Goettingen Journal of International Law. (The GoJIL advisory board includes a number of our European colleagues, including Göttingen's Kai Ambos and Andreas Paulus, judges on Germany's State Court and Constitutional Court, respectively.)
Ioana dedicates her post

to the women of the Balkans, irrespective of ethnicity, nationality, religion and political allegiances, who have 'fought' to live their lives despite the many wars and conflicts.