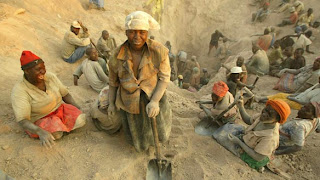 The opening and expansion of global markets has created and exacerbated resource curses, the phenomenon in which natural resource abundance creates governance problems.
Yet international legal scholarship has been slow to recognize the relationship between freer trade and the financing of internal conflicts. My recent article, "Regulating Resource Curses: Institutional Design and Evolution of the Blood Diamond Regime," published earlier this year in the Cardozo Law Review, looks closely at a recent effort to address the global trade in so-called blood diamonds as a potential model for resource curses more generally.
I develop a case study of the Kimberley Process, an international diamond tracking regime (prior IntLawGrrls post), by investigating both the scope of the institution’s regulatory reach as well as the mechanisms by which members promulgate and enforce those regulations. The article focuses on the unique coalition of nongovernmental organizations, corporations, and states, and on the unusual international arrangement upon which they agreed.
Evidence from the evolution of that institution suggests that although designers may indeed seek to maximize their own interests, what determines whether an institution can regulate effectively, and when it may move beyond the designers’ original interests, are legalization elements of that international institution. These include:
► The obligations the regime creates;
► The precision with which those obligations are defined; and
► The possible delegation of interpretive and enforcement efforts.
In accumulating and assessing this evidence, my article contends that while skeptics may correctly identify the Kimberley Process’s initial alignment with state and corporate interests, this lightly legalized regime provides an opportunity for substantial progress on human rights. Although the Kimberley Process might appear as an attempt to whitewash state and corporate abuses, over time, the institution can -- even though it need not necessarily -- evolve to address both the rebel-induced and state-inflicted human rights violations related to the diamond trade.
The article acknowledges 2 factors:
► The importance and potential stickiness of initial design choices; and
► The fact that institutional evolution in favor of issue expansion and greater enforcement is merely feasible rather than inevitable.

Thus, this article demonstrates some of the possibilities and limitations of looking to the Kimberley Process as a model for resource curses, and more generally for other areas in which NGOs seek to align state, corporate, and human rights interests.
Developments which occurred after my article went to press suggest that the Kimberley Process has in fact tried to address state-initiated human rights abuses. In so doing, it is facing some substantial state resistance:
► In 2009, the Kimberley Process sanctioned Zimbabwe for bad behavior in the newly discovered Marange diamond fields. Rather than expel Zimbabwe, members suspended its exports. By November 2009, Zimbabwe agreed to a joint work plan to restore compliance by eliminating smuggling, allowing greater monitoring, and reducing military abuses against civilian miners. Despite these promises, Human Rights Watch reported that as late as September of 2010, soldiers still control large portions of these Zimbabwe fields and continue to violate the human rights of the local miners. (credit for 2006 photo by Tsvangiray Mukwazhi/Associated Press of women and men miners at Marange)
► A November 2010 Kimberley Process meeting failed to reach agreement on whether to lift all export limitations, and thus kept the suspension in place. Zimbabwe’s monitor responded by unilaterally certifying millions of diamonds which are already beginning to make their way to market.
►Many speculate that a December 2010 WikiLeaks posting will influence an ongoing Kimberley Process meeting on the Zimbabwe export question. The 2008 U.S. government cable states:

'In a country filled with corrupt schemes, the diamond business in Zimbawbe is one of the dirtiest.'

► Meanwhile, NGOs such as Global Witness and World Vision have stopped short of calling a boycott, but asked consumers and retailers to act more vigilantly in ensuring that diamonds purchased over the holiday season have not funded violence.
If Zimbabwe continues on its current path of non-compliance, or pulls out of the process entirely, many fear the diamond industry will return to the bad practices of the 1990s, in which widespread human rights abuses were common.
Others suggest, however, that targeted pressure campaigns could convince industry networks to reject working with those that trade in these blood diamonds and persuade individual consumers not to purchase them.
Only time will tell. But this article illuminates the institutional mechanisms that will facilitate success or failure on the Zimbabwe problem.
by Lesley Wexler at 5:00 AM