(Many thanks to IntLawGrrls for giving me the opportunity to contribute this guest post!)

Since 17 February 2008 – the day of Kosovo’s declaration of independence from Serbia – it has become rather pressing to understand whether this act has legal precedential value and hence what its consequences are. The International Court of Justice (below right) issued an Advisory Opinion on Kosovo this past summer. (Prior IntLawGrrls posts available here.) But that opinion has not shed much, if any, light on the question of precedence.
Whether the Court was asked, on the one hand, to analyze the legal consequences of the independence of Kosovo, or, on the other hand, merely to “narrow[ly] and specific[ally]” reply whether “the unilateral declaration of independence by the Provisional Institutions of Self-Government of Kosovo is in accordance with international law,” remains, of course, a separate debate.
Be it as it may, the dilemma remains:

Is Kosovo a precedent for (remedial) secession?

My article recently published in the Goettingen Journal of International Law, "Secession in Theory and Practice: The Case of Kosovo and Beyond," attempts to put forward a lucid account of the legal implications of Kosovo’s independence. To do so, the article explores the international regulations on secession, as well as the circumstances that led to the case at hand.
The paper carves out the place of secession in international law by appeal to fundamental principles and legal doctrine, and concludes:
► There is no general jus secedendi, or right to secede.
► There are instances in which a right to secession is recognized under international law. These refer to states explicitly acknowledging a right to secession in their domestic law, or multinational states recognizing that their constituent peoples have the right to self-determination.
► There is one controversial case that divides scholarship, the one of remedial secession.
► Lastly, there is a trend towards the legality principle governing secessions, as distinguished from the traditional neutrality doctrine.
It is useful to consider the theory on secession with state practice, to the extent that such practice can be discerned from major socio-political events of Kosovo’s history – from the battle of Kosovo Polje in 1389 to Security Council Resolution 1244 (1999) that set up the United Nations Interim Administration Mission in Kosovo (UNMIK). From the juxtaposition of this theory and practice, a second conclusion can be drawn: Kosovo is a case of remedial secession and thus it represents a potential legal precedent.
And yet the exceptionality discourse!
While the elements of remedial secession are gathered, states deprived this instance of practice of its precedential value, and made it a legally insignificant act.
Some explanations are in order.
An action that is novel or inconsistent with current practice gains precedential value if other states accept it; acquiescence and protest are the fundamental state reactions to an action, therefore those are of interest in the case of Kosovo. Serbia, as the state with most interest in resolving the Kosovo case, has strongly protested against the legality of Kosovo’s secession. Other states protested

or decided to withhold recognition. All officially identify the potential of setting a legal precedent as reasoning.
The fascination about the Kosovo case lies in the discourse of those states that chose to support and recognize Kosovo as an independent state, describing it as a sui generis/special/exceptional case. Throughout the years that it has sought independence from Serbia, Kosovo has maintained that it has the legal right to do so. In this context, the most staggering statement is made by Kosovo itself in its own declaration of independence:

Kosovo is a special case arising from Yugoslavia’s non-consensual breakup and is not a precedent for any other situation.

The Kosovo secession has been articulated, but as a non-precedential situation. In the end, as scholars Georg Nolte and Helmut Philipp Aust wrote in an article published last year,

states are both subjected to international law and create and authoritatively interpret it. 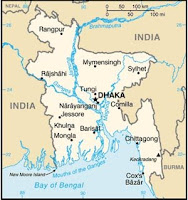 way of its discriminatory and repressive actions against part of its population, puts its own raison d’être into question. It is a perverse implication, one that states will have to deal with when another unique Kosovo enters the international arena.
Thirty-nine years ago, Bangladesh seceded from Pakistan. The debate whether Bangladesh set a precedent for a right to remedial secession continues. Regrettably, Kosovo is merely a Bangladeshi déjà-vu.
by Ioana Cismas at 5:00 AM