Look On, Read On: Can watching & reading stop a renewal of Sudan's other war? 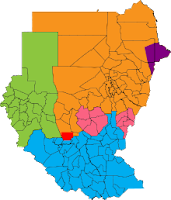 Yesterday marked the launch of the Satellite Sentinel Project, which aims to use technology to provide early warnings and raise public awareness about violence in Africa's largest country (map credit), and so to try "to deter the resumption of war between North and South Sudan."
Satellite Sentinel's a partnership of Hollywood celebrities (George Clooney et al.), corporate America (Google et al.), nongovernmental organizations (the Enough Project and the Harvard Humanitarian Initiative), and intergovernmental organizations (agencies of the United Nations). It promises to provide corroborated information

in near real-time (within 24-36 hours), with the aim of heading off humanitarian disaster and human rights crimes before they occur.

A core objective -- to use this information to prod the public to pressure public officials -- is apparent in the Project's slogan: "The world is watching because you are watching."
Can it work?
At the least, it may make more difficult a full-scale return to Sudan's other war -- not Darfur, the western Sudan (green on the map) turmoil that continues to simmer even as Sudanese President Omar al-Bashir continues to evade an International Criminal Court warrant, but rather the civil war that ravaged the southerly regions of Sudan for 20 years before the signing of a Comprehensive Peace Agreement in 2005. The agreement granted the south some autonomy and provided for a future referendum on full independence from the government in Khartoum (in the orange region on the map). Voting is just around the corner: January 9, 2011, in Southern Sudan (blue) and Abyei (red). Backers of Satellite Sentinel hope that the Project's eyes in the sky -- commercial satellites -- and voices on the ground will help to avoid violence during or after the election.
(Unstated is another potential use of these data. Should proactive efforts fall short, surveillance footage and contemporaneous reports would create a trove of evidence for prosecution of perpetators. To name a possible forum, the International Criminal Court is keenly interested these days in election-related violence. (And see here.)
Missing from the Project mix?
In contrast with Darfur, the history of North-South troubles is largely unknown. This absence of background knowledge may make it harder to push the public to push their officials. But there is much background information available.
In addition to any number of weighty tomes, here are a few mass market treatments that provide contexts for what is to come: 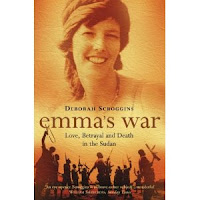 ► Emma's War: An Aid Worker, a Warlord, Radical Islam, and the Politics of Oil--A True Story of Love and Death in Sudan (2002) by Deborah Scroggins, formerly a reporter for the Atlanta Journal-Constitution. The title pretty much says it all: this is the biography of Emma McCune, a Briton whose art history studies led her to Southern Sudan, 1st as an aid worker, then as an independence advocate, and ultimately to marriage with a rebel leader and death, in a Nairobi car crash, at age 30. McCune's trajectory sweeps with it much about the war.

► Acts of Faith (2005) by Philip Caputo, a onetime Chicago Tribune reporter and Pulitzer Prizewinner. Readers of Emma's War will find in this novel a familiar charater -- a lost young woman, American rather than British, who arrives in Sudan as an aid worker and eventually marries a rebel warlord. She's easier to understand than McCune, perhaps because the fictional format allowed the author more free rein. Acts benefits too from other characters and other subplots, all woven around a large and complex story of Western involvement (charitable and otherwise) in the civil war and the warriors' practice of enslaving captives.

► What Is the What (2006) by Dave Eggers. In this book Eggers, the subject of a prior post, writes the autobiography of Valentino Achak Deng, born in the midst of the civil war. Deng's tragic journeys include a short stint as a child soldier and a much longer one as a "Lost Boy," wandering with other unfortunates in a wilderness that leads 1st to a refugee camp in Kenya and ultimately to a new and strange life in the United States. This is the best written of the 3 books, but the reader will better understand it if informed as well by the other 2.
by Diane Marie Amann at 6:00 AM