(My thanks to IntLawGrrls for the opportunity to contribute a 2-part series of guest posts. Part 2 is below; Part 1, published yesterday, is here)

Just announced are the terms for the next round of talks on Iran's nuclear technology. They are set for next Monday and Tuesday in Geneva, Switzerland, between:
► Catherine Ashton, the European Union's High Representative for Foreign Affairs and Security Policy, formerly an officer of the London-based Campaign for Nuclear Disarmament; and
► Dr. Saeed Jalili, secretary of Iran's Supreme National Security Council and its lead nuclear negotiator.
As demonstrated in my post yesterday, to date these negotations have been marked by lack of trust on all sides. Debate remains, however, to what extent the lack of trust can generate legal implications.
Some argue that without a ‘smoking gun’, there is no ground to act against Iran. They warn of the danger in relying on strategic assessment, which may prove to be misguided, as was the case of Iraq in 2003.
Others emphasise the severity of the risks, on the one hand, and the ability of proliferators to hide the evidence, on the other hand. They agree that comprehensive and logical assessments regarding nuclear proliferation need to include as much hard evidence as possible; nonetheless, they contend that in the interest of non-proliferation, such assessments should not be held hostage to the absence of such evidence. (credit for above logo from Iran's atomic energy site)
No less significant is the question of how to deal with a state once it is identified as a suspected proliferator.
Clearly the regime established by the 1968 Nuclear Non-Proliferation Treaty is ill-equipped to deal with cases such as Iran’s.
The provisions of the treaty are not geared to seeking out and stopping suspected defectors; moreover, these provisions lack precise criteria for dealing with such suspicions when they arise. Drafters devoted little attention to the prospect that a state might develop an interest in becoming a nuclear-weapon state without first withdrawing from the treaty. 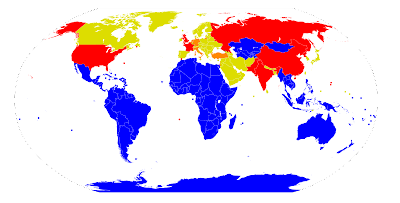 (credit for map showing states with nuclear weapons in red, treaty-established Nuclear Free Zone in blue, and nuclear sharing states in orange, and states that are none of the above yet members of the treaty) In a world of new instabilities, where nuclear technology is increasingly accessible, the treaty is failing to achieve containment. The treaty's consensual regime was established during the Cold War, which encouraged adherence to the treaty and to the safeguards regime of the International Atomic Energy Agency. Some argue that this consensual regime is not only increasingly ill-fitted to address nuclear weapons proliferation risk, but actually enhances the incentive to proliferate.
Various initiatives and proposals attempt to escape this impasse.
Some proposals would try to strengthen the existing non-proliferation regime from the inside, both substantively and institutionally.
Other proposals move away from consensual mechanisms aimed at encouraging compliance, and towards effective enforcement. Even initiatives related directly to strengthening compliance with safeguard agreements invest in non-consensual mechanisms for strengthening the existing regime. Examples include:
► Generic Security Council resolutions to address the case of a state that has been found by the Agency to be deliberately in non-compliance with its safeguards undertakings; or
► Declaration that nuclear weapons proliferation constitutes a ‘threat to the peace’, thereby engaging the sanctions regime of U.N. Charter Chapter VII in every case of non-compliance with the Atomic Energy Agency.
None of these proposals, however, addresses what is perhaps the greatest obstacle to success of the Non-Proliferation Treaty regime: its unique formal asymmetry and the legacy of international practice. Whatever the legal extent of the obligation to disarm, undoubtedly the 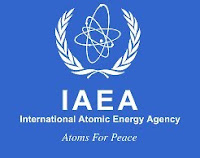 political legitimacy of the regime is being undermined by what is perceived as abuse of status by the 5 treaty-recognized nuclear weapons states, Britain, China, France, Russia, and the United States.
It remains to be seen whether effective legal tools will be adopted in a timely manner to prevent Iran’s nuclear programme from maturing into a nuclear threat, or whether international law will continue to play a merely responsive role to that threat.
by Yaël Ronen at 4:26 AM